Phil Mickelson has always enjoyed interacting with his fans and he did so once again at a practice day at the Rocket Mortgage Classic. 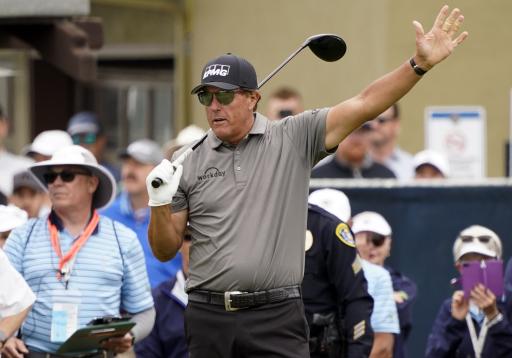 The 2021 PGA Tour season will always be a memorable one for Phil Mickelson as he became the oldest major winner in golf's history at the PGA Championship.

The six-time major winner is not only one of the best to ever pick up a golf club, but he is arguably the best player to interact and engage with his fans at PGA Tour venues.

His energy and willingness to meet fans both young and old is admirable and while playing a practice round at Detroit Golf Club for the Rocket Mortgage Classic, a young boy caught up with Mickelson to let him know that he is a fellow left-handed golfer.

The 51-year-old was more than happy to speak to the young fan and also pose for a picture with him, as well as many other young fans at the venue.

Mickelson also said to his fellow lefty that he would hope to catch up with him later on in the week so he could give him a glove or another memento from his golf bag.

It is fair to say that these situations and periods spent with golf fans are clear reasons as to why Mickelson is one of the most popular players in golf and in world sport.

Golf fans reacted to the footage of Mickelson and the spectators:

"Phil is literally the most wholesome golfer," one fan said.

"Such a class act," one fan commented.

"Okay gotta admit this is v wholesome," another fan said.

"It's just another reason why he's so liked," another fan commented.

"This dude is the freakin goat," one fan said.

NEXT PAGE: THE FOOTJOY PREMIERE SERIES FLINT HEADLINES OUR BEST SHOES OF 2021