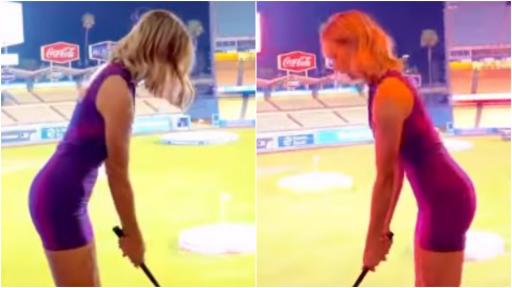 Golfer, social media sensation and YouTuber Claire Hogle has wowed her followers with her latest post on Instagram as she shows off her incredible right AND left-handed golf swings.

As we all know, mastering the swing on our strongest side is hard enough let alone being able to mirror it on the opposing side.

Claire, who has amassed just shy of 220,000 followers on the Gram, makes it look a piece of cake as she hits balls on the driving range.

"Would you have to play me righty or lefty to have a chance?" Claire captions her latest post.

Claire also has her own YouTube Channel - subcribe here

Phil Mickelson might be the world's greatest ever left-handed golfer, but he reportedly can play to single figures right-handed.

Though it should probably be noted that Lefty is actually a Righty when it comes to everything else he does away from the course.

Former World No.1 and right-handed PGA Tour golfer Dustin Johnson could probably also break 80 when it comes to using a left-handed swing on the course.

DJ could legit break 80 as a lefty. pic.twitter.com/BKTTf8u1nP

It's probably fair to say PGA Tour pro Stewart Cink's left-handed swing could do with a bit of work, judging by his efforts on the famous Island Green 17th ahead of this week's Players Championship.

A left-handed top and one confused tracer meet the island green. pic.twitter.com/QtkrIIAnek

Now Watch: Rory McIlroy gives masterclass on how to hit bombs on the PGA Tour