"If my buddy made me play that shot and I made it, I would bring it up at the eulogy at his funeral" 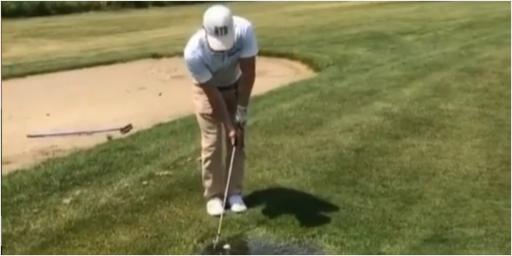 When it comes to golf we all know of that one mean friend who will always make you play shots even though it's just a bit of fun.

Stuck on a mole hill? You'll have to chance your arm. Your ball is embedded? Sorry pal, that's just a tough break.

Stuff the rules, this is how we're gonna play today.

It appears another one of these situations happened recently and it was captured on film.

It shows a player standing just off the side of the green with their ball stuck firmly in the middle of a puddle.

Of course, he is entitled to relief but it likes like he has not taken it or not been given it.

He plays the shot and somehow not only manages to get the ball out but it trundles towards the hole at pace and then drops.

RELATED: WILL THE GREEN JACKET FIT OVER BRYSON'S GUNS?

I mean, just look at that in all its glory.

It's a fantastic shot and no doubt one that will constantly do the rounds on social media feeds.

You'll probably watch it multiple times before scrolling on to your next viral clip.

The video has already been viewed several hundred thousands times and counting.

Some users were quick to give their thoughts on it.

Here are some of our favourites:

"If my buddy made me play that shot and I made it, I would bring it up at the eulogy at his funeral. It may even be the focus of the entire eulogy, with a break to watch the video."

"*The rules of golf have entered the chat*"

NEXT PAGE: 10 FACTS YOU MAY NOT KNOW ABOUT TIGER WOODS