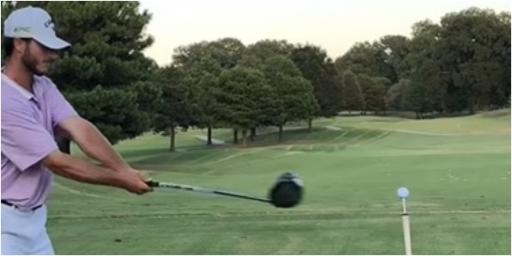 As far as trick shots go this one from YouTuber Bubbie Golf is pretty special.

Here at GolfMagic we are sure that many of us would struggle to make contact let alone rip a tight little draw down the fairway.

A golf clip has gone viral from YouTuber Tom Broders who is part of team Good Good.

They are are group of young men from America who post course vlogs, trick shots and general golf content.

They rose to super stardom off the back of the gm_golf channel which was started by Garret Clark.

Take a look at the clip here:

Just look at that.

You may recall seeing their videos circulate the web as they post crazy trick shots that only have to be seen to be believed.

One of their most recent viral videos included one of the group making a hole-in-one on a par-4.

The crazy thing about that video was that fellow YouTuber Micah Morris hit the pin before Matthew Scharff stepped up and holed his.

The group of lads went absolutely ballistic and couldn't believe they caught such a moment on film.

Fans reacted with a string of admiring comments that included:

"I have never been prouder"

RELATED: COULD TIGER WOODS TEE IT UP WITH NELLY KORDA?