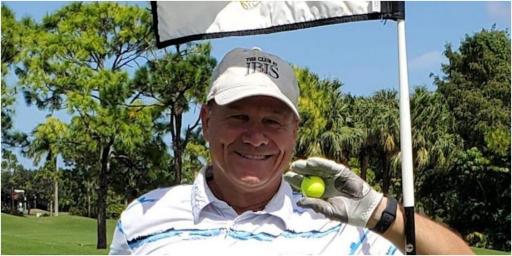 An amateur golfer from Florida made a hole-in-one then aced the same hole when he stepped up again in the following round.

Raymond Brunelle, 63, had not made a hole-in-one in more than 50 years but found one when he played the Heritage Course at The Club at Ibis earlier this month, Golfweek reported.

He stepped up from 160 yards and sent an 8-iron towards the flag and wasn't sure the where the ball had gone.

"It was kind of hazy that day," he told the publication. "We saw it bounce toward the hole and disappear, but we weren't absolutely sure it was in the hole or hidden behind the pin.

"When we got to the green, we didn't see and, sure enough, it was in the hole."

It was only four days later when the man, from West Palm Beach, returned to the 16th hole.

"I just didn't want to embarrass myself," he was quoted as saying. "I was hoping just to make a par."

This time around the flagstick was only 128 yards away and Brunelle decided he could get the ball there with a wedge.

JORDAN SPIETH HOLE IN ONE!

There was no question about it this time, he said.

Brunelle told the publication he made two hole-in-ones as a junior.

What exactly are the odds of this happening?

Brunelle achieved something that is 67 million/1.

What is ineresting at his golf club is that Brunelle was in fact treated to a drink instead of having to fork out.

Members are reportedly given $50 credit.

RELATED: HOW TIGER WOODS' CHIPPING CAN HELP YOU