Golf fans on Twitter believe Scott McCarron is CHEATING on the greens! 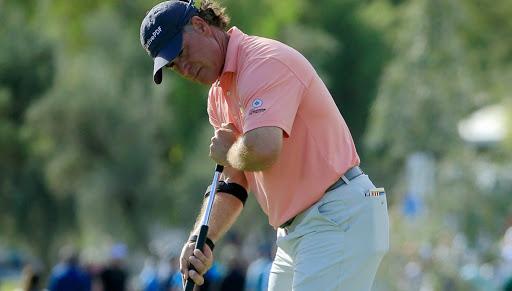 Golf fans and former PGA Tour pro Colt Knost have rushed onto Twitter to vent their frustration after believing Scott McCarron is still "anchoring" his putter on the Champions Tour despite the rule change coming into force back in 2016.

Knost, who recently retired from the PGA Tour and now works on SiriusXM, posted a close up image of McCarron anchoring his putter into his chest at the Hoag Classic on Sunday, with the caption "Oh my [anchor]."

He also then added a video which you can see below...

Judging by the crease in McCarron's shirt, you have to believe there is strong evidence that he has the putter wedged to his chest - which is now against the rules of golf.

As you can imagine, the incident saw a flurry of irate golf fans questioning why McCarron was not being penalised for such action.

"Sorry Colt, but that is clearly anchored," said one golf fan.

"Rules don't apply on the Champions Tour," commented another fan.

Another fan was in agreement: "Evidently, this will continue until a fellow player in the group calls him and/or [Bernhard] Langer on it and shames them publicly. Rules are rules, but apparently the Champions Tour has no desire to enforce this one.

One golf fan said: "That's anchored like me to a prime rib buffet."

One golf fan said: "This dude also put on 30lbs of raw muscle at age 50. When he breaks rules, he does it right out in the wide open public."

McCarron went on to finish fifth at the Hoag Classic, three strokes behind Ernie Els who claimed his maiden Champions Tour title.

What do you make of the incident? Do you believe Scott McCarron still anchoring his putter? Share your thoughts and comments on our social media channels.