Golfer hits a drive 338 YARDS while using a children's driver!

Long drives are usually associated with long clubs and faces with a low degree, but this golfer didn't need that to hit this huge shot. 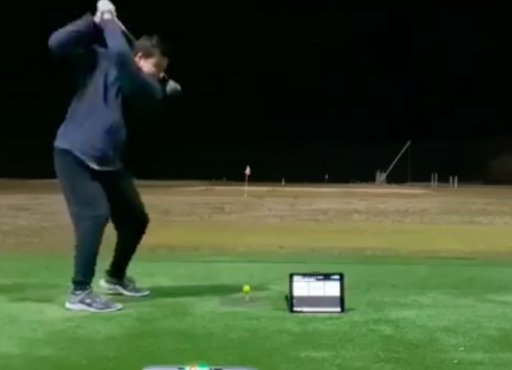 Bryson DeChambeau plays with the Cobra King LTD Pro driver that has only 7.5 degrees of loft, which is an incredibly low number.

This helps the 27-year-old hit his drives as far as possible, but for one golfer on Instagram, he did not need the latest technology or a low degree clubhead to hit a drive over 300 yards.

Press Labrie, who competes in World Long Drive contests, was using a children's driver when he stepped up and got ready to take a huge swing at his ball.

Usually, such a small and soft club like a children's driver wouldn't be able to withstand the speed and power of a swing like Labrie's. Nonetheless, the big hitter connected perfectly and sent the ball flying, laying to rest at 338 yards.

Labrie also achieved a ball speed of 188mph and a clubhead speed of 128mph, which are incredible numbers that only World Long Drive golfers such as him could produce.

"That hit Neil Armstrong in the head," one fan said.

"Where can I buy that tech man... Drop a link I need that," one fan commented.

Labrie was using a FlightScope Golf tracker to find out how far he had hit the drive. FlightScope Golf was the world's first 3D Doppler tracking radar for golf and is an extremely popular device across golf clubs and practice facilities.

NEXT PAGE: BEST GOLF TIPS: HOW TO IMPROVE YOUR DRIVING USING THE WALL DRILL