Golfer hits shot whilst sitting in a tree, but what's the ruling?

Another unusual video was posted on the popular golf rules social media page. 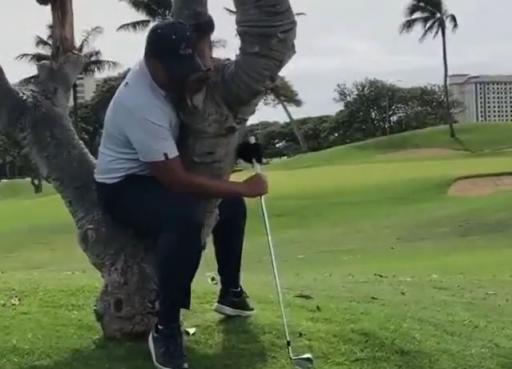 We've seen some iconic shots that involve trees over the years on the PGA Tour, with Sergio Garcia's epic shot coming to mind, but what is the ruling if someone uses a tree as a seat during a golf shot?

It's certainly not an incident that is seen very often and I personally have never seen it done until now, but a video was posted on the Golf Rules Questions Instagram page that showed a golfer sitting in a tree so he could hit his ball.

The golfer's ball seems to be too close to the tree to approach his ball with a normal stance and most players would flip their club around to chip out using their left hand, but not this guy.

Instead, he sits in the middle of the small tree with his legs and arms either side, using his club in a broomstick motion, like an Adam Scott putt and chips his ball back into play.

WATCH THE SHOT IN THE CLIP BELOW:

"Is this a legitimate stroke?" posed the question on the golf rules page.

"Yes. The player hasn’t 'built‘ a stance, he is simply sitting on/in the tree. He has also attempted to swing the club," read the answer.

In reaction to the latest post, one golf fan asked in the comments what constitutes to "building" a stance.

"Moving a movable obstruction or loose impediments into a position that assists with your stance. Also not permitted, altering the surface of the ground, such as creating holes or eliminating holes with soil," replied Blake, who runs the Golf Rules Questions account.

NEXT PAGE: Tiger Woods lands his golf ball in a TRASH CAN, but what's the ruling?