WATCH: This golfer was pranked right before hitting his tee shot... 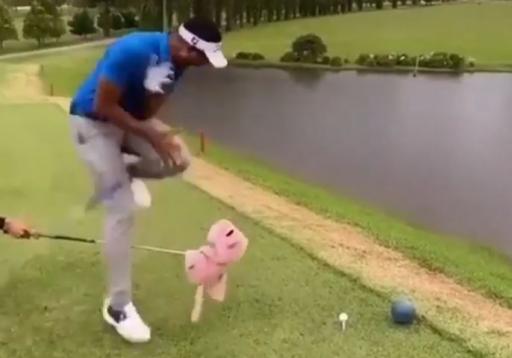 This golfer was pranked on a tee box right before attempting to stripe on down the middle, after his friends used a headcover to scare him...

We've seen some fantastic golf pranks recently and the reaction to this one was absolutely priceless, as this golfer almost jumped out of his skin thanks to his friends.

In a video posted on the Golf Gods Instagram page, this unlucky golfer looked armed and ready to rip his drive down the middle of the fairway, until his friend scared the life out of him.

Watch the hilarious prank in the video below:

This trick was timed to absolute perfection. Allowing the victim to get as ready as possible for his shot, before sliding what looks to be some sort of animal headcover between his legs and screaming, causing him to jump in the air like a cartoon.

The video went down well on social media too, with hundreds of people responding in the comments.

"I'll be trying this next time I'm on the course haha!"

"Haha that is absolutely brilliant!"

"Best one I've seen for a long time, unreal!"

NEXT PAGE: GolfMagic readers debate GOLF HOODIES: "Stuck up toffs are to blame!"