Tyrrell Hatton wins the BMW PGA Championship wearing a golf hoodie every single day - and it's caused plenty of debate with golfers... 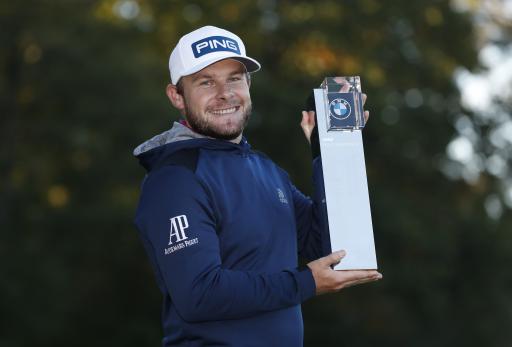 Tyrrell Hatton fulfilled a childhood dream by winning the famous BMW PGA Championship at Wentworth, and he did so wearing an eye-catching adidas Golf hoodie every single day - something we absolutely love seeing here at GolfMagic.

While Hatton's four-stroke victory marks a third Rolex Series win and vaults him up into the world's top 10 for the first time in his career, unfortunately most of the golfing universe is left talking about his choice of attire rather than his impressive performance on the West Course.

Golf traditionalists were seemingly up in arms at witnessing Hatton playing golf at the iconic Surrey venue wearing a hoodie, certainly judging by a number of comments we have seen doing the rounds on social media in recent days.

They would have then been spitting their cucumbers out of their G&T's when seeing the Englishman change his shoes in the Wentworth car park upon his arrival for the final round on Sunday.

Changing his golf shoes in the carpark.

For us here at GolfMagic, golfers should be able to wear whatever they want on the golf course.

The one exception to this rule is a pair of jeans. We don't mind the recent joggers look that some PGA Tour pros have been sporting of late, but a pair of jeans just doesn't work for us at all. It's also pretty difficult to swing freely in a pair of jeans, I would imagine.

As for hoodies though, yes, we are all for a bit of that. The adidas Golf version that Hatton was rocking at Wentworth last week actually looked pretty smart, too.

It's 2020 and it's time we all did our bit to encourage new golfers to the sport. If you don't think attire plays a big role in bringing new golfers to our sport, then you really don't understand the bigger picture at all. A lot of interested players do not play golf simply because of the traditionalist way of dressing as a golfer, and it's as simple as that.

Yes, memberships, equipment and pace of play all play their part, but golf attire is a huge area that needs exploring, and for that reason alone we massively applaud what adidas Golf and Hatton did at Wentworth last week. To end up winning the tournament is just the icing on the cake.

In fact one of my friends, who plays golf about twice a year, messaged me during the final-round broadcast on Sunday and said: "Absolutely loving this Hatton fella's look. Definitely feeling a hoodie on the course. Great to see someone looking a bit different out there."

That view might not be shared with everyone out there, but perusing the 500+ comments we received on our latest "Should Hoodies Be Worn On The Golf Course?" social media post on Sunday, it certainly appears as though plenty of you were "feeling a golf hoodie" too.

It certainly divided opinion at least. Even one lady named Karen got involved, but you can probably imagine which side of the fence she was sat. Let's take a look at some of the most notable comments from some of our readers:

@tyrrellhatton has just teed off in round 4 of the @bmwpga, but it's his attire that has everybody talking What do you think about wearing hoodies on the course? We don't see any problem with it, do you? Let us know...

GolfMagic reader Phil wrote: "The sport is dying because the older generation are so stuck in the 1800s with what can be worn or can't be worn on a golf course that it turned the younger generation away with out of date, silly and completely un-needed clothing traditions.

"Golf has been left behind the times and is now suffering for it. I believe smart casual and comfortable for the player is completely fine.

"Stuck up toffs are to blame... get with the times!"

Jonathan Yarwood wrote: "Dear Golf, it's 2020 not 1920. Yes, that's a hoodie and it's a modern item of clothing that is worn by a younger demographic - a demographic you need to attract in order to grow and survive. It's progress. You can't afford to be exclusive any more. Be inclusive. Embrace change."

GolfMagic reader Beverley was also in agreement: "We will never attract youngsters to the game if we keep living in the past."

"They look great," said our reader Julian. "I'm going to get one.  It's good to see more contemporary styles coming into the game. I really don't see an issue."

Another reader Mike said: "Someone in my group normally has a hoodie on and it's never been questioned. Think it all depends on the club as we have lots of young members at ours."

Hoodies aren't for everyone though, admits one of our readers Gary: "I wouldn't wear one for golf, most likely to annoy me rattling around the back of my neck."

GolfMagic reader Robert also agreed: "More suitable for hanging about the local chippie, but I don't see the problem with a smart pair of jeans and T-shirt. Let's be honest Rickie Fowler cuts about with some horrendous gear but still acceptable."

"Those saying the attire that people are required to wear is what is keeping the game from certain people," said GolfMagic reader Jack.

"It's the cost of clubs, equipment, membership, lessons... not having to not wear jeans and a collared shirt. Personally I wouldn't wear one, from other people wearing it. I'd ever so slightly lean towards no, but that's personal preference.

"I wear hoodies away from the course literally all day except at work. I've got no problem following a few easy rules at a golf club."

"How long until tracksuit bottoms are allowed on the course?" said our reader Jim. "This is a sport steeped in tradition and I think having some standards is still necessary."

A lady named Karen said: "Not a fan of this at all. It's completely against the tradition of golf. I will be writing in to the European Tour to complain first thing on Monday morning."

We have received many more comments on the issue, so go and check them all out on our social media channels.