Golfer retrieves his golf ball after it was lying on a huge alligator!

The things we will all do to save ourselves from losing a TaylorMade TP5 golf ball... 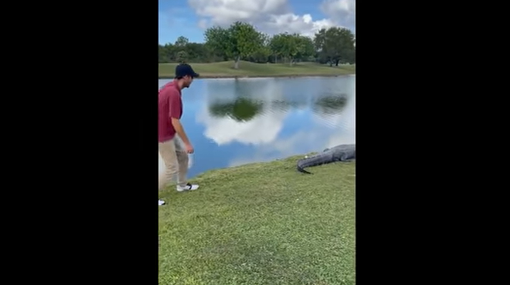 Sometimes you just have to ask yourself, is saving yourself a TaylorMade TP5 ball really worth it when it's lying on a huge alligator?

There was no debate about it judging by the reactions of this particular golfer named as Kyle Downes, who was playing out at Coral Oaks Golf Course in Florida at the weekend. Watch the video below to see what happened, it was pretty incredible:

What a pick off the tail... we aren't sure there are many golfers out there who would have been brave enough to attempt that one!

In this instance, the golfer is entitled to take a free drop away from a 'dangerous condition', which falls under Rule 16.2 in the rules of golf:

a - When Relief Is Allowed

A “dangerous animal condition” exists when a dangerous animal (such as poisonous snakes, stinging bees, alligators, fire ants or bears) near a ball could cause serious physical injury to the player if he or she had to play the ball as it lies.

A player may take relief under Rule 16.2b from interference by a dangerous animal condition no matter where his or her ball is on the course, except that relief is not allowed:

- When playing the ball as it lies is clearly unreasonable because of something other than the dangerous animal condition (for example, when a player is unable to make a stroke because of where the ball lies in a bush), or

- When interference exists only because the player chooses a club, type of stance or swing or direction of play that is clearly unreasonable under the circumstances.

b - Relief For Dangerous Animal Condition

When there is interference by a dangerous animal condition:

(1) When Ball Is Anywhere Except Penalty Area. The player may take relief under Rule 16.1b, c or d, depending on whether the ball is in the general area, in a bunker or on the putting green.

(2) When Ball Is in Penalty Area. The player may take free relief or penalty relief:

Penalty for Playing Ball from a Wrong Place in Breach of Rule 16.2: General Penalty under Rule 14.7a.