Golfer RIPPED over "unacceptable" shot that put child at risk

This golfer thought he was being funny but has been grilled on social media for this video. 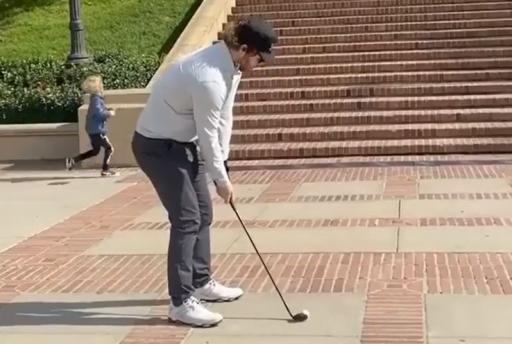 A golfer has been ripped on social media after he hit a golf ball up a flight of stairs with multiple people potentially at risk, including a small child.

The video was posted on the Golferdoingthings Instagram page and although he clearly possesses enough skill to hit the shot, it doesn't look like there is a golf course in sight and he was just doing it for a joke.

However, golf fans haven't seen the funny side in the slightest and neither did a woman in the video who confronted the man for his actions, to which he responded by sarcastically calling her 'Karen'.

Watch the video for yourself below:

“Are you good?” Via: @griffpippin

The man in the video is a "golfing comedian" called Griff Pippin and it seems many people think he went too far trying to get a few laughs on Instagram here.

"Dude is shooting directly into four people, a dog, and a toddler no matter how good you are this is unacceptable," said one golf fan in the comments.

"Nothing about this is funny."

"That scared the s*** out of me when that little kid started up the stairs."

"Not cool or funny. Could knock someone out or take an eye."

"Dude still hit the ball with that little kid walking up."

"Was that supposed to be funny?"

NEXT PAGE: Bryson DeChambeau once said there's no such thing as grain on a green