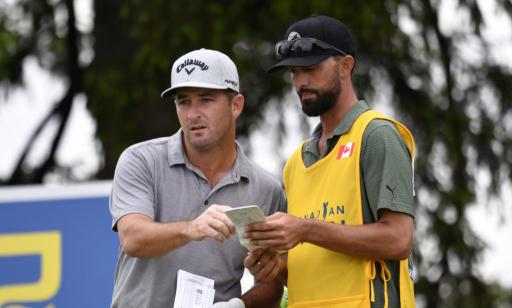 A golfer who shot a dramatic score of 202 has denied he was trying to set the record for the highest score in a USGA history during last week's US Amateur Championship qualifying tournament.

Trey Bilardello, who has caddied for PGA Tour winner Matt Every in the past, defended his 131-over par score (missing the cut by 124 strokes) when appearing on Barstool Sports’ golf podcast Fore Play earlier this week.

Tournament officials disqualified Bilardello under Rule 1.2 for "serious misconduct and failing to play in the spirit of the game."

Bilardello started on the 10th hole and parred the opening two holes, before making a triple at the 12th.

It was then that Bilardello's playing partner Kristian Fortis could see he had stropped trying.

"After the first nine, he said that he wanted to shoot the highest recorded score in USGA history,” Fortis told Golf Channel.

"He’d be right next to the hole and then I guess he’d think to himself that he didn’t have enough strokes and he’d hit his ball in the opposite direction of the hole. He was really rude to a lot of the officials, too."

USGA's senior director of championship communications Beth Major said: “His disqualification was deemed appropriate as a result of the individual’s failure to show consideration for other players — deliberately playing away from the hole to run up his score."

However, Bilardello took to Barstool Sports' podcast this week to explain the stories were "completely false."

“It’s quoting Kris and saying he wanted to shoot the highest score recorded in USGA history - that is completely false,” Bilardello said on the Fore Play podcast.

“Kristian and I both became pretty good friends through this because we’ve seen what the media will write about people. And we both know that what that guy wrote is false. The worst thing for a caddie to do is be talked about. I did not want to be spoken of. I spoke to Kristian and his father yesterday and they believe the article that that guy wrote about me was not consistent with what he was trying to say or the day.”

Bilardello slightly dodged the question when asked exactly what went wrong on the course.

“Well right now there’s an investigation going on by people that of why I shot that. And those are the people I’ll answer that question to,” he said.