Golfers do a WHEELIE in golf cart before tipping it over

Two golfers have been ripped on social media for doing a wheelie in a golf cart before it eventually tipped on its side. 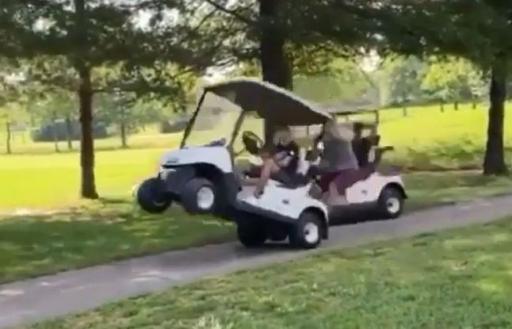 We've seen some pretty stupid videos in the past involving golf carts but I can't say I have ever seen someone do a wheelie in one, until now...

I mean it was a pretty stupid idea as it's quite obvious that a golf cart is meant to stay on all four wheels and accidents involving carts can lead to some pretty serious injuries, but these two guys didn't seem to care.

Watch the video below where one golfer stands on the back of the golf cart to tip it back and the other drives it, but just when they think they've pulled off a wheelie, the idiot driving the cart thinks it's a good idea to turn...

Now I'm all about everyone having fun on the course and cracking open a few cans with your mates, there's nothing better, but golf carts aren't exactly cheap and damaging a golf club's property isn't funny, which is why these two were ripped on social media for their actions after the video was posted across numerous accounts.

"Stop tearing up golf carts! What the hell?"

"Absolute idiots, I hope that hurt."

"I remember my first beer."

"What is it with people having a few drinks on the course and thinking it's okay to start damaging club property?!"

"People that try stuff like this should be banned!"

NEXT PAGE: Golfer loses the world's MOST EXPENSIVE golf ball...