Greg 'The Shark' Norman has reacted to the comments on his rather revealing beach pic that went viral last year. 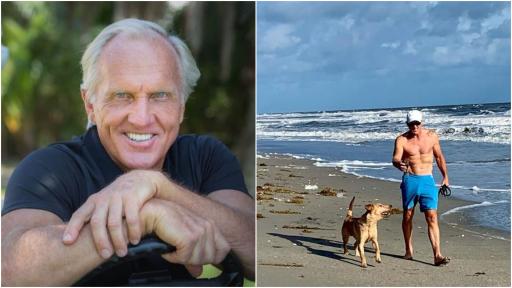 Greg Norman has finally reacted to the comments posted on his rather revealing beach pic back in November, that had golf social media influencer Paige Spiranac change his nickname to the 'Hammerhead Shark'.

The golf legend caught everyone by surprise towards the end of last year when he posted a picture of his day at the beach with his dog.

At the age of 65, Norman is in incredible physical shape, which he says is down to his hard work in his home-built gym, but it wasn't his upper body that made the headlines a few months ago.

Speaking to The Herald Sun, Norman revealed he found some of the comments "hilarious" after the picture caused thousands of golf fans to join in on the fun.

“I was just out walking my dog and it is what it is,” Norman told The Herald Sun.

"I think some of the comments were hilarious, and I don’t normally read the comments, so it was quite a bit of fun.

"I have a full gym at my house. I built it. It’s got a cardio room, a full weight room, free weights, all that stuff.

“It’s not a big deal to me, right? At the end of the day, I do enjoy keeping fit at my age. I don’t have any ego about me, but I do love having a fit life.”