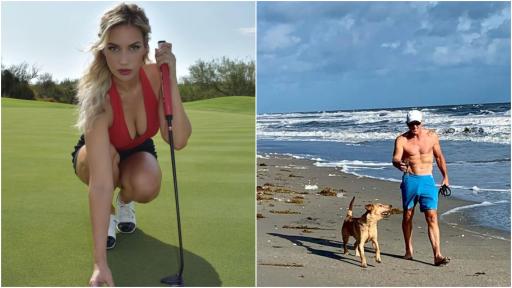 Paige Spiranac gave Greg 'The Shark' Norman a slightly different nickname on Twitter this week after the golf icon posted a revealing picture on Instagram.

Norman posted a few snaps of him walking along the beach with his dog, to which he captioned "a man and his dog on a Sunday" and you only need to take a quick glance to see why it got such a reaction in the comments section (which are definitely worth reading through).

The Australian made The Shark nickname famous during the 80's as he became one of the most feared and dominant players on tour, winning 88 times throughout his professional career, including two Open Championships, the first in 1986 and another in 1993.

WATCH: Golfer has absolute NIGHTMARE after topping ball on driving range and slipping!

Spiranac, who recently slammed Bryson DeChambeau for "disrespecting" Augusta National before The Masters earlier in November, was quick to crack a joke about Norman on social media, calling him the "Hammerhead Shark".

RELATED: Paige Spiranac: "Bryson saying Augusta was a par 67 was so disrespectful"

Of course that tweet caused even more reaction on social media and jokes were flying left right and centre. One of my favourites read: Bryson "So how long can I make my driver?"... Rules official: "Have you seen Norman in the shower? That long."