Ian Poulter has praised Bryson DeChambeau for changing the game, but believes he could face an injury problem down the line. 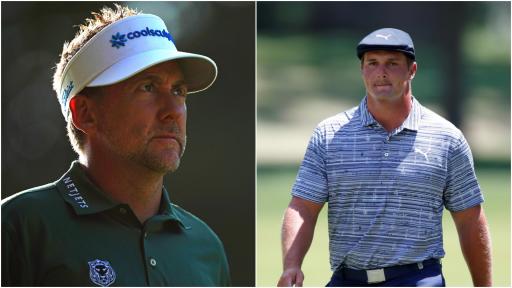 Ian Poulter has praised Bryson DeChambeau for changing his game recently and believes his new extreme distance off the tee is what golf fans want to see, although he is concerned it could lead to an injury.

DeChambeau continues to be the talk of the town on the PGA Tour after he piled on pounds of muscles to add some serious distance to his game and his fellow professionals have all been impressed with his transformation.

During the first round of the Memorial Tournament, DeChambeau showed off his power with a 423-yard drive down the first hole.

WATCH: DeChambeau hits an absolute BOMB down the first at Memorial

Poulter has been impressed with DeChambeau's new ability off the tee and thinks that he will be the man the fans come to see, once the PGA Tour reopens for spectators.

"When you look back to the era of John Daly carrying the ball over 300 yards, and that was over 20 years ago, everybody wants to see someone hit it as far as they possibly can," Poulter told Sky Sports News.

"Bryson [DeChambeau] has definitely done it his own way, and you have to applaud him for doing that. He's unique in his thought process and he's very different in the way he has approached the game.

"Obviously, by trying to move the needle for himself in hitting it 360, 370 yards, it's something very strange that we're not used to seeing. For sure, it's fan-friendly and it's good on the eye for them.

"I just hope he doesn't get injured with everything he's doing and as hard as he's hitting it. Will he cause himself an injury hitting the ball that hard, repetitively? We'll have to see."

NEXT PAGE: Bryson DeChambeau: "The HARDER I swing, the STRAIGHTER it goes"