The 18th hole at River Valley Golf Course caused havoc during the Girls 3A State Golf Tournament in Iowa, reportedly leading to 10-putts and astronomical scores. 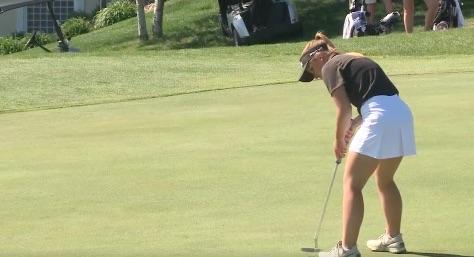 Friday saw the conclusion of the State Golf Tournaments of the Iowa Girls High School Athletic Union and four champions were crowned.

It was the 3A event at River Valley Golf Course in Adel that grabbed everyone's attention and not just because of the superb golf on show.

Heryford shot rounds of 75 and 74 to tie for the lead with Eden Lohrbach, but it was Heryford who won after the third playoff hole.

Today at the Girls 3A State Golf Tournament at The River Valley Golf Course in Adel, the average score on hole 18 was a quadruple bogey.

No, the golfers weren't bad, but this had to have been the most unfair pin placement I've ever seen. This slope gave the athletes no chance. pic.twitter.com/F7OyqIjbkO

Courtesy of Jake Brend on Twitter, he managed to film footage of the 18th hole at this venue which featured one of the most brutal pin positions you are likely to see on a golf course.

The pin appeared to be at the top of an extremely steep slope and if you watch the footage above, you will see putts that only stopped a couple of feet short of the hole and still rolled yards away and some balls rolled off the green.

As reported by Brend, the average score on this hole was a quadruple-bogey and he guessed that each group took up to 20 minutes to putt out on this green.

Brend also reported that he saw a number of 10-putts on this green and as you can see in the footage, the players were very frustrated by the outcomes of their putts.

This footage is certainly alarming and although Brend informed us that the Iowa Girls High School Athletic Union didn't choose this pin position, you would like to think this type of decision will be avoided in future tournaments.