Scottie Scheffler goes in search of a fifth title in his last nine individual starts on the PGA Tour. 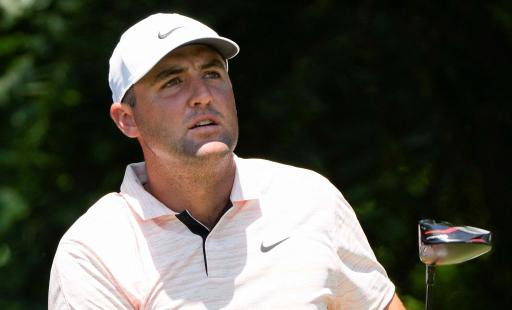 Scottie Scheffler has given himself every chance of landing a fifth title in his last nine individual starts on the PGA Tour after moving into a three-way tie for the lead heading into the weekend of the Charles Schwab Challenge.

Scheffler, now a runaway World No.1 after a scintillating run of form the past few months, posted a flawless round of 5-under 65 to go alongside his opening 66 and he joins compatriots Scott Stallings (64) and Beau Hossler (65) on 9-under par for 36 holes.

The reigning Masters champion birdied his first two holes of the round and then added three more on the back nine at 10, 12 and 17.

Of course he still made the putt

Despite all the difficulties of the famous Colonial layout and its relatively small greens, Scheffler has yet to make a bogey so far this week.

Scheffler is unthinkably looking to win for a fifth time in his last nine individual starts on the PGA Tour having won the WM Phoenix Open, Arnold Palmer Invitational, WGC Match Play and The Masters.

"It's been busy, all great, have enjoyed the extra stuff that has come with winning tournaments and The Masters," said Scheffler, who missed the cut at the PGA Championship last week.

"It was a good little break (after missing the cut at the PGA) and am happy to be out here this week."

Parick Reed is a further shot off the pace on 8-under par as the former Masters champion goes in search of a first win since the Farmers Insurance Open in early 2021.

Justin Thomas could not match his exploits over at Southern Hills last week and the two-time PGA champion missed the cut on 3-over par after a second-round 72.

Collin Morikawa (71) sneaked into the weekend on 1-over par.

Next Page: Kiradech Aphibarnrat makes a TWELVE (12!) on the final hole at the Dutch Open