"It's better than his shirt" 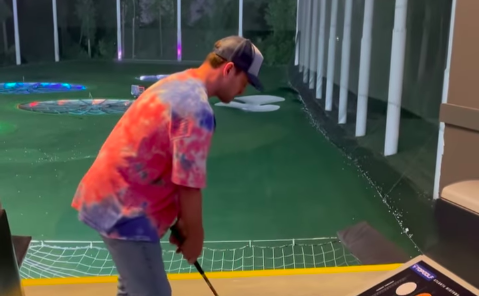 Justin Timberlake is known for his catchy tunes but he's also a very keen golfer.

So it's no surprise given the fact he can dance he also has the much needed hand-eye coordination essential for golf.

Timberlake, 40, is one of the few celebrities who has actually hosted a PGA Tour event such is his interest in the game.

Between 2008 and 2012 Timberlake hosted the Shriners Hospitals for Children Open.

He looks just as comfortable on the golf course as he does the stage and has previously been paired with Justin Rose at the Alfred Dunhill Links Championship.

Timberlake decked himself out in a hoodie as he took the famous courses in Scotland and proved just how good he is.

He is a number of celebrities who are a dab hand at golf such as former NFL stars Tom Brady and Tony Romo.

A video has gone viral of Timberlake after he posted the swing on his own Instagram page.

Take a look at the video below:

He effortlessly keeps reloading and shows what good coordination he has.

The video has been viewed more than two million times and counting.

Comments on the video included:

"Better than his shirt"

RELATED: HOW TO WATCH THE ZOZO CHAMPIONSHIP