It appears the popular show on Netflix has now taken over the golf world... 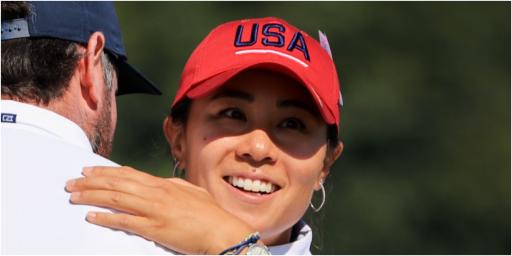 The stars of the LPGA Tour were greeted with a chilling reference to the popular Netflix show Squid Game this week.

Danielle Kang revealed the creepy references on her Instagram page when she arrived for the BMW Ladies Championship in Busan, Korea.

Kang, a five-time winner on the tour and a one-time major champion, posted the unsettling images on her Instagram stories.

It appears that each player received a metal tin with a traditional Japanese cookie inside and you might not think too much of it at first glance.

However if you have been living under a rock you wouldn't realise this was a clear reference to the Netflix show Squid Game which has millions of fans watching.

The internet TV series is a complete sensation where in-debt contestants of the "Squid Game" are pitted against each other to play a series of children's games.

There are deadly consequences if they fail to complete the tasks within minutes of them being revealed.

Kang tried the challenge of trying to carve the shape into the biscuit and later revealed she accidentally dropped the cookie.

The BMW Ladies Championship field is headlined by the likes of in-form Jin Young Ko and Lydia Ko.

The 154-player field tournament is played out over four days.

It marks the first Asian-based event since the pandemic started.

NEXT PAGE: WILL WE SEE TIGER WOODS PEG IT UP WITH NELLY KORDA?