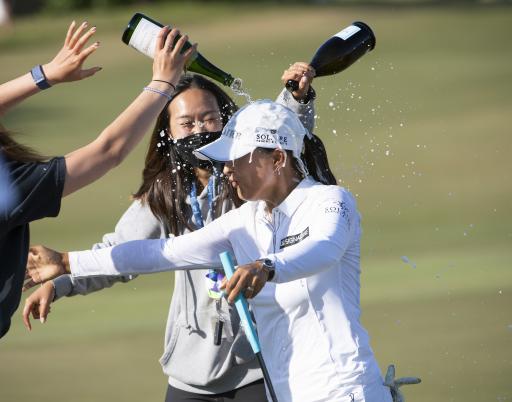 Jin Young Ko capped off her season in style by cruising to a five-stroke victory at the LPGA Tour's season-ending CME Group Tour Championship at Tiburon Golf Club.

Due to the coronavirus pandemic, Ko has only made four starts on the LPGA Tour this season and needed to finish runner-up at last week's US Women's Open in order to qualify for the final event of the year.

The win for Ko secured her seventh LPGA Tour title, as well as a cool $1.1 million prize for winning the season finale.

The Korean shot a final round of 66, finishing the tournament 18-under par, five shots clear of Hannah green and defending champion Sei Young Kim.

Ko started the final round one stroke off the lead, but a birdie at her opening hole was followed up with another gain at the sixth, where Kim also made birdie.

The World No.1 recovered from a bogey at the 9th with three consecutive birdies from the 12th to take the lead, which was followed up with another birdie at the par-3 16th, before she rolled in her final birdie of the day at the par-5 last to extend her lead.

Overnight leader Kim shot a level par final round of 72 on the final day, with Green taking a share of second place after he bogey-free 5-under final round.

Georgia Hall three-putted her way to a double bogey at the 16th to sign for a 72, which saw her slip into T7, while Brooke Henderson and Austin Ernst were eight strokes off the lead on 10-under par.

The 2021 LPGA Tour season will return at the end of January with the Diamond Resorts Tournament of Champions at Four Seasons Golf and Sports Club in Florida.