Justin Thomas and his father Mike won the PNC Championship, whilst Tiger Woods and his 11-year-old son Charlie finished seventh. 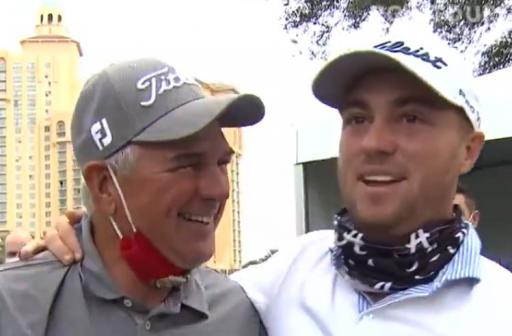 Team Thomas claimed the PNC Championship on Sunday, after World No.3 Justin Thomas and his father Mike beat Vijay Singh and his son Qass by one stroke.

With 15 birdies in 18 holes during the final round of the scramble format event, Team Thomas finished the tournament at Ritz-Carlton Golf Club 25-under par, with rounds of 62 and 57.

All eyes were on Team Woods throughout the tournament, with the 15-time major champion teaming up alongside his 11-year-old son, who looks to be a superstar in the making.

Not only does Charlie possess a swing that reminisces a young Tiger, but he has also picked up a few phrases that he made famous over the years.

WATCH THE VIDEO BELOW TO HEAR CHARLIE TALKING TO HIS BALL

"Memories we'll have for our entire lives," Woods said. "He [Charlie] Is not going to appreciate this at 11 years old. I didn't when I was with my dad. As the years go by, you start appreciating it more."

The event featured 20 teams, where major champions or winners of the Players Championship were able to take to the field with a family member.

Team Thomas started the final round four shots off the lead, but got off to a flying start with birdies at their opening seven holes. Three more consecutive birdie were found from the 9th hole, before another four in a row were added from the 13th.

A par at the 17th was then followed up with one last birdie, when Thomas Snr rolled in a five-footer to seal the win.

"This is a real highlight and the most normal part of this crazy year and we had so much fun out there," Thomas Jnr said. "My dad played great today and made a lot of putts which made it easy on me."

NEXT PAGE: Tiger Woods and Charlie Woods: the TaylorMade clubs in their bags at the PNC