Jordan Spieth reveals main reason for struggles at The Players 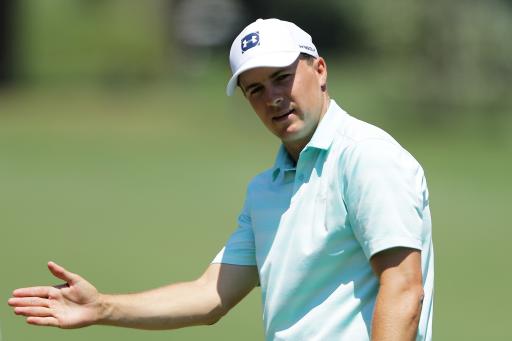 Jordan Spieth has revealed his recent poor record at The Players Championship has been a result of being too aggressive and not patient enough for the exacting test presented by TPC Sawgrass.

Four years ago, Spieth, at the tender age of 20, found himself in a tie for the lead heading into the final round of the PGA Tour's flagship event of the season, only to falter on the Sunday with a 74 to finish tied fourth.

Since then, Spieth has endured three straight missed cuts. In his first 58 of the Players, he was 14-under par and bogey free. Since then he's a combined 10-over par for 122 holes.

“I think just being a little forceful,” Spieth said Tuesday.

“A good example would be like on No. 1 out here, pin is front left. If you're not in the fairway you can't get anywhere near the hole. I'll miss it in the left rough and try and land it on that tier right next to the hole. I'll either short side myself in that bunker … and just kind of situations like that where, say the patience side I seemed to display at Augusta is, OK, I'm out of position, what's the plan to make my par and move on.

“Out here I just, the last couple years, I just haven't had that patience. I haven't approached it like I approach the major-championship caliber golf.”

Patience hasn’t exactly been a virtue this year, either. Spieth has four top-10s in 10 starts but it wasn’t until last month in Houston that he worked his way into contention, shooting a final-round 66 to tie for third.

A week later, he put together a spectacular final-round 64 at Augusta National to nearly chase down eventual Masters champ Patrick Reed.

As for the Players, Spieth is hoping to capture the same kind of attention that he has when it comes to majors. Even though the Players isn’t one, the course demands as much.

“The first year I played here, I almost won it, and so I just kind of assumed that it would come easy to me,” said Spieth, who is coming into the tournament of the back of consecutive top-three finishes.

“I kind of looked at the last few years and just kind of came in thinking, Oh, if I miss it in a tough spot I'll get up-and-down. Historically that's happened, but historically now that hasn't happened. I'm ready to kind of get back on that first-year path but doing it the right way.”

The Players
TPC Sawgrass
<
Previous
Phil Mickelson: I don't know if Tiger wants a piece of me
>
Next
Rory McIlroy golf swing: How to replicate McIlroy's driver swing
Latest News
Equipment news
Bad blood and "p***ing off" players: LIV Golf's headache for OEMs
Golf news
GEO Foundation launches Sustainable Scorecard as part of special week
Golf news
Paige Spiranac opens up on size, fat-shaming and being "a loser"
Golf news
England cricket star Jonny Bairstow ruled out for 2022 after freak golf injury
Equipment news
Charley Hull: What's in the bag of The Ascendant LPGA champion
Latest Reviews
Drivers
Are they WORTH IT? Titleist TSR Driver Review | TSR2, TSR3, TSR4
Irons
Caley Golf Iron Set Review | Is this the best value iron of 2022?
Putters
Zebra Putter Review | "One of the most popular golf products ever!"
Wedges
A Spin MACHINE! Callaway JAWS Raw Golf Wedge Review
Wedges
Their BEST Yet?! TaylorMade Hi-Toe 3 Golf Wedge Review
Equipment Reviews
Equipment
FootJoy's Blues Collection is perfect for your game this summer!
Equipment
Peter Millar have an AMAZING selection of golf shorts!
Equipment
The BEST PUMA golf polo shirts as seen on the PGA Tour!
Equipment
The BEST Nike Golf shirts as seen at the PGA Championship
Equipment
NEW VICE Pro Drip Silver Hills Golf Balls: Limited Edition
Latest Tips and Instruction
Tips and Instruction
DP World Tour pro Hurly Long and his meditation technique...
Tips and Instruction
Learn how to chip like a winner on the DP World Tour!
Best tips and instruction
What can we learn from Jordan Spieth's new pre-shot routine on the PGA Tour?
Tips and Instruction
How to NEVER MISS another short putt with Manolo Vega!
Tips and Instruction
Sergio Garcia tells Me and My Golf GREAT driver tip: "Pull the chain!"
Related Articles
PGA Tour
Rickie Fowler at Wells Fargo: "I'm trying to be better than I ever was"
DP World Tour
"I've been so bad" Eddie Pepperell can't believe he's just made a cut
The Masters
The Masters: "Hungry" Cameron Smith says mum finally likes his hairstyle
PGA Tour
WGC Match Play referee on DeChambeau-Pieters mix-up: "Nothing we could do"
PGA Tour
Collin Morikawa: "You put it as a funk, I put it as a learning experience"