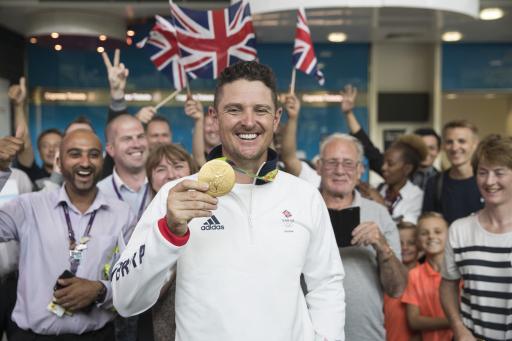 Justin Rose was greeted to a hero's reception when he landed in Heathrow this week (Photo: Getty Images)

Justin Rose admits it will be a "very special" moment when he makes his first appearance on British soil since winning an Olympic gold medal at the European Tour's British Masters at The Grove in October.

Rose will attempt to win his second British Masters title having won his first at Woburn Golf Club in 2002 when getting the better of his good friend Ian Poulter.

FEATURE: WHY ROSE'S OLYMPIC WIN MEANS SO MUCH MORE THAN GOLD

“I think everyone could see what representing Great Britain in the Olympics meant to me, and it will be very special to come back home as an Olympic champion and play in front of the home fans at the British Masters,” said Rose, who is an ambassador for England Golf.

“We all hoped that golf’s inclusion in the Olympics would widen the appeal of the game and that is also the overall aim of the British Masters, so it will be great to be able to build on the momentum of Rio at The Grove.

“For me, personally, it will be another chance to play on home soil after missing the BMW PGA Championship at Wentworth earlier this year through injury, and having won the title 14 years ago, I would love to have another chance to win again it in October.”

Rose will join compatriot and tournament host Luke Donald in helping the event boost golf participation in Britain by engaging with new and existing audiences through innovative coverage and initiatives such as live masterclasses.

The tournament, which last year saw 57,000 spectators in attendance at Woburn Golf Club, will once again be supported by Sky Sports.

Tickets for the 2016 British Masters supported by Sky Sports are now on general sale, with fans able to buy tickets for the final three rounds of the European Tour tournament at The Grove.