Thomas talks about his betting past alongside NBA legend Jordan as a Kentucky teen. 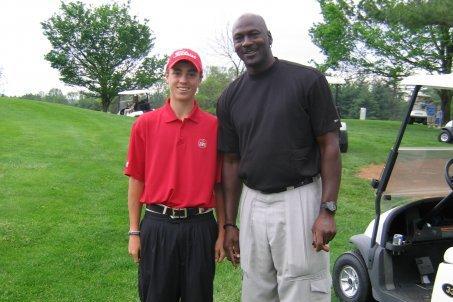 With sports betting now legalised in the United States, and Phil Mickelson and Tiger Woods announcing their outrageous $9 million PPV money match in Vegas, it would seem a number of PGA Tour stars aren't prepared to hold back on their past gambling stories.

One of the best ones to be revealed by golf writer Jason Sobel includes the one shared by Justin Thomas' encounter in his mid-teens with NBA legend Michael Jordan.

Every year, Jordan and a group of friends would play Harmony Landing before the Kentucky Derby. Thomas’ dad, Mike, was and still is the head pro there, and Justin (and his game) was well known around the club.

Thomas would caddie for the group as early as age 13 but finally got a chance to play with Jordan and Co. a couple of years later.

“When I was 16, I went out with the group and they started on No. 3 for some reason,” said Thomas.

“I was riding with MJ. When we got to the first hole, he said, ‘Go get your clubs.’ He told them, ‘Alright, I’ve got the little man. We’ll take whoever wants us.’ There’s eight people. He wouldn’t tell me the game; he said I didn’t need to hear that.”

Thomas played from the same tees as Jordan and his crew and got hot late in the round.

“We played the last seven holes and I made four birdies,” he said. “We drummed ’em pretty good. That was fun. He just made me feel comfortable. I’d played in some big national tournaments, but that was the biggest deal I’ve ever played in. It was pretty cool. We had a pretty memorable day that we still talk about.

“He always took care of everybody tipping, so let’s just say my tip was a little bigger that year.”