Koepka on Reed: "He was building sand castles in the sand"

Brooks Koepka slams Patrick Reed for his actions during the Hero World Challenge in December. 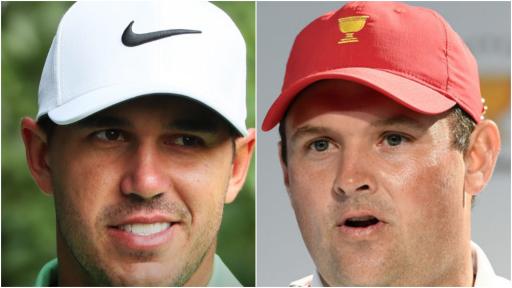 Brooks Koepka has slammed Patrick Reed by claiming his compatriot was "building sand castles in the sand" during the Hero World Challenge in December, following a recent interview on SiriusXM PGA Tour Radio.

When quizzed about Reed's controversial two-stroke penalty for improving his lie in a waste bunker three months ago, Koepka told how Reed knew exactly what he was doing by twice brushing sand away with his practice swings.

"Yeah, I don't know what he was doing, building sand castles in the sand, but you know where your club is," said Koepka, when asked whether he thought Reed had cheated in the waste bunker.

"I took three months off and I can promise you know I know if I touch sand. If you look at the video, obviously he grazes the sand twice and then he still chops down on it."

WATCH: REED CAUGHT BUSTED "CHEATING" FOR IMPROVING HIS LIE IN THE SAND

Reed at the time defended his actions by claiming the video cameras made things look at lot worse.

According to the rules of golf, players are not permitted to improve their ability to play a shot by "removing or pressing down sand or loose soil."

Koepka also made it clear that Reed is not the first person he has seen improve his lie.

The newly demoted World No.2 explained he saw something similar happen during at a US Open once, but he did not say anything at the time.

"It goes on a little bit more than people think," said Koepka. "I haven't opened my mouth, but now if I saw it, just because of where I'm at in the game, the stature that I have, I would definitely say something."

RELATED: EX PGA TOUR PRO CALLS REED A "D***" AND THAT HE CHEATED