Annabel Dimmock is a winner on the Ladies European Tour and she is now dating Love Island star and ITV Racing broadcaster Chris Hughes. 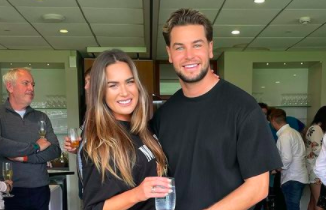 If you are an avid golfer, the dream is to find a partner who also shares your love of the game. For Annabel Dimmock and Chris Hughes, they have both done exactly that.

Dimmock started playing golf when she was just eight years old and the most influential people in her career have been her coach Lawrence Farmer and six-time major champion Sir Nick Faldo.

Dimmock turned professional in 2015 and has built a solid career on the Ladies European Tour. In 2019, she won the Jabra Ladies Open at Evian Resort Golf Club and finished 27th in the order of merit that season.

The 24-year-old has struggled to find consistent form on the tour this season but back in June, she had another good week at the Jabra Ladies Open by unfortunately losing to Pia Babnik in a playoff.

Dimmock has clearly had an impact on her boyfriend's golf game as well, as he plays off a handicap of 9 and has been seen out and about on the golf course on social media.

Hughes, who rose to fame in the third series of Love Island in 2017, played at the BMW PGA Championship Pro-Am yesterday and Dimmock was there to support him.

As Hughes and Dimmock walked the fairways together at the Virginia Water venue, they looked extremely happy and this tied in with the overall atmosphere of the event.

Stars from the sports and entertainment industry such as Robbie Fowler, Eddie Hearn, Shane Warne and Harry Redknapp all took part in what is always a fun event.

NEXT PAGE: THE BEST GOLF SHORTS IN THE CARL'S GOLFLAND CLEARANCE SALE!