Emma Raducanu is on the brink of reaching the final of the US Open in just her second career Grand Slam appearance. 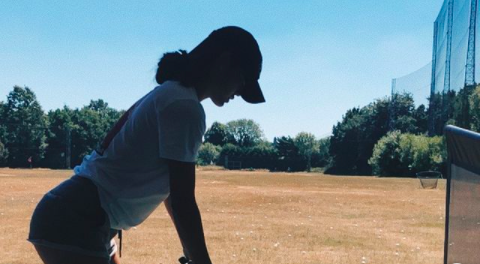 Emma Raducanu is into the semi-finals of the US Open after beating 11th seed Belinda Bencic 6-3 6-4 in the quarter-finals.

The 18-year-old, who won over tennis fans with her fantastic performances at Wimbledon, will play Maria Sakkari in the early hours of Friday morning for a place in the final.

"I'm so, so happy to come through," said Raducanu.

"Belinda is such a great opponent and in unbelievable form, her ball speed caught me off guard so I had to adjust and adapt. I'm just taking care of what I can control and I'm on my own journey."

Now you might think what Emma Raducanu has got to do with golf, but as a matter of fact, she is also a handy golfer and is partial to a session on the driving range.

In a video that she posted on her Instagram page, she is seen taking aim down the range with an iron, and she strikes the ball very nicely up into the sky.

She has performed beyond her years so far at Flushing Meadows and even if she does not pick up the famous US Open trophy this time around, Raducanu has a massive future and British tennis has a great player to support all the way.

NEXT PAGE: THE BEST GOLF SHORTS IN THE CARL'S GOLFLAND CLEARANCE SALE!