A letter to Jordan Spieth: "I sincerely apologise"

GolfMagic's John Craven pens a letter of apology to the Open champion. 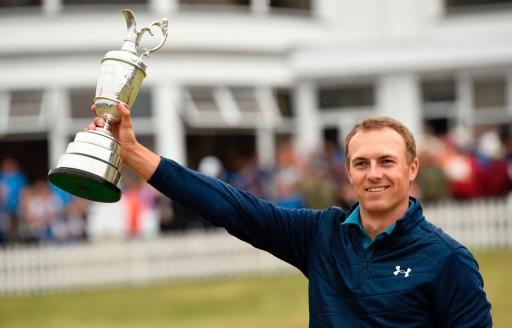 It takes a real man to admit when he’s made a mistake and Jordan Spieth, I sincerely apologise.

For years I have labelled you boring, even dismissed your talent because you didn’t have the charisma to accompany it.

Well amongst a pub of drunkards with conversation threatening my focus, I remained transfixed on your final round at The Open last Sunday.

It was possibly the most fascinating round of golf I will ever witness, in that there were so many dreadful shots and so many good ones. It had all the hallmarks of Seve in ’79, only this time I was alive to see it all.

I had foolishly given you the Jug on Saturday evening. Cursed you from high heaven as Rory’s demise flooded my pillow with tears. You looked invincible, frugal with mistakes. Not a crumb of hope to be had for a forlorn field. But then I never considered how YOU were feeling when you lay your head to rest on Saturday night.

How ignorant of me to overlook the demons plaguing your thoughts. Your Masters meltdown in 2016 had never been exorcised. I’ve been trying to close The Liam Byrne Memorial Golf Day for years so I totally get it. I know how hard it can be coming down the stretch. How tempting it can be to compose your speech before securing the result. I choke every time Jordan.

It was obvious you were nervous too. I’ve never been an admirer of your swing but for all its faults you’ve had the most enviable short game to compensate. You would be the most infuriating player to come against in Matchplay – spraying balls like an unruly hose and still holing bombs for par.

THE OPEN: NICKLAUS SAYS SPIETH'S DROP WAS "AN UNBELIVABLE DECISION"

I felt for Kuch on Sunday, particularly on 13. That slice was horrendous and deserved to be punished. And I do wonder how unplayable that lie actually was, but the rules are there to be used and I can’t blame you for manipulating them. You still had no right to make five. Sometimes I really hate you Jordan.

Yet what you did from there was truly inspiring. That six iron on 14 was the ultimate bounce back. It had that ‘go in look’ that Butch Harmon plays into the ground every time you make a stroke with the putter. I couldn’t hear what Butch was saying when you were missing a few on the front nine but his eyes wouldn’t be the most reliable things at the best of times.

THE OPEN: SPIETH'S CADDIE NOTES FROM FINAL ROUND ARE A SIGHT TO BEHOLD

Talk about a run of golf though Jordan. I could see Kuchar’s heart crumble in high definition when you rolled in that eagle on 15. Even you looked surprised but it was an example of mental fortitude that I wished McIlroy possessed. I believe it to be your biggest weapon, bar none.

THE OPEN: SPIETH EXPLAINS WHY HE SAID "GO GET THAT" TO CADDIE

I was glad you won in the end, and as a fellow sufferer of the balding gene, I was proud to see you take off that Under Armour cap to give the greatest walk in golf its due respect. I hope you found it liberating, though if I had your money I’d be going down the transplant route. But luckily for you, you’re not me Jordan.

If I was to hire a private investigator to get some dirt on you, I am utterly convinced you’d come back clean every time. And if you were in fact thinking about that speech during your final round, then it was well worth it. That was pitch perfect too.