Golf fans have taken to Twitter to rant about a potential rules incident involving Lexi Thompson at the Women's Open. 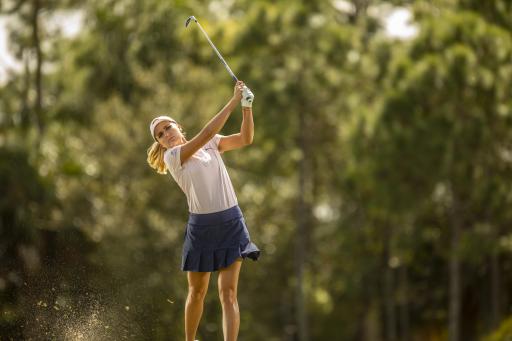 Lexi Thompson has caused a social media meltdown amongst golf fans after she was seen moving the grass behind her ball with her club, in what has proven to cause quite the rules debate on Twitter.

The American was on the par-5 16th hole at Royal Troon where she had found the rough right of the fairway from the tee. Thompson's ball seemed to be sitting next to a tuft of grass, leaving an awkward shot to follow.

As Thompson lay her club to address the ball, it seems she pushes the long grass out of the way of the ball, although the position of the ball did not change and the grass also popped back up to its original place, technically meaning Thompson didn't improve her lie.

Watch the video below and see the incident for yourself:

Now according to the R&A's rules - Rule 8.1a - it states that a player must not move, bend or break any growing or attached natural object.

In the video, you can clearly see the tuft of grass springs back to its original position, but that didn't stop golf fans from venting their furstration and calling Thompson out.

Take a look at some of the responses to the video below, or click on the tweet above to see more:

"Lexi you can't be serious!"

"A player is not allowed to move, bend or break any growing or attached natural object. Clear breach of the rules. Can we have consistency of the rules? One rule for the big name players another for the rest of the field. Happens too many times don't you think?"

"This looks an awful lot like improving the lie from Lexi Thompson..."

"This is a lie that occurs so many times in Scotland (and all links) and you know full well that it isn’t loose just from looking at it. The amount of times over the years I’ve cursed under my breath at those links rough lies, but you just close your eyes & ‘hit it on the volley’"

"So we have the best players in the world...Reed, Bryson, Lexi....all blatantly cheating. It’s not even 'bending the rules'.”

"Was really surprised the commentators made no comment on this. Simply, you can't do that."

NEXT PAGE: Golfer gets HOLE-IN-ONE using PUTTER on 102-yard par-3!