Golfer gets HOLE-IN-ONE using a PUTTER on 102-yard par-3!

Watch the incredible moment this golfer landed her face ace ever and did so using a putter. 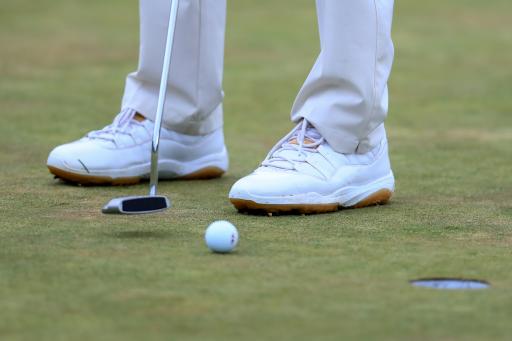 You'll hear hundreds of professional golfers and golf coaches say that you should try and make golf as simple as possible, which is why so many people use a putter from off the green. It's a simple way of stopping you from making any costly mistakes and getting your ball close to the hole, but I can't say I've seen many people do it from over 100 yards...

Sheep Ranch, one of the layouts at the Bandon Dunes resort that opened in June, has received fantastic reviews and the scenic course features some incredible holes, including a picturesque 102-yard par-3 with a green that slopes off into the Pacific Ocean, making it quite a nervy tee shot.

One golfer in particular, Allison Koehnke, a 36-year-old from Oregon, knew that her short irons were not a particularly strong part of her game and with a little inside knowledge from her caddie for the day, decided to pull out the old Texas wedge and attempt to putt her way onto the green.

Well not only did Allison make the green with her long-distance putt, but she ended up getting a plaque with her name on it when this happened. Watch the incredible moment in the video below:

Tracked down this woman who made an ace with her PUTTER at Bandon Dunes’ Sheep Ranch, as first shared by ⁦@NoLayingUp⁩. She’s got quite the story to tell! That her husband got it on video is priceless. pic.twitter.com/3TSsbb8MAS

That's right, Allison made her first ever hole-in-one and in some style. Allison's ball made its way down to the green, before taking a slight knock off of her playing partner's ball and finding the cup.

Ace with her putter ⁦@BandonDunesGolf⁩ Sheep Ranch and the deservedly joyous walk to the sweet ball retrieval from cup. pic.twitter.com/jrOBLM3kT9

According to Golf Digest who interviewed Allison after the video was made viral by No Laying Up, not only was it Allison's first hole in one, but also her first full round of the year.

The video of the hole in one received hundreds of responses, some applauding Allison for her epic ace and some questioning if it even happened (for argument's sake, we definitely think this is real).

Even Phil Mickelson replied, who was obviously pleased to see someone else putt from distance after he was scrutinised for his 78-yard putt at the Memorial Tournament in July.

It’s was a strong club selection.