Martin Borgmeier may specialise in hitting monstrous tee shots at World Long Drive events, but he is clearly focusing on his all-around golf game too. 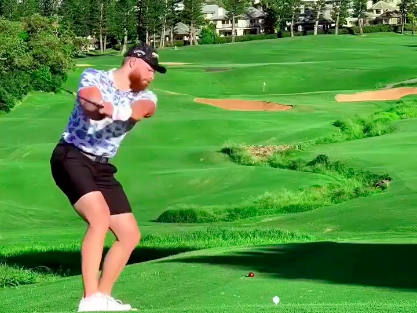 Martin Borgmeier burst on to the Long Drive scene when he won the Bavarian Long Drive Championship in 2017. He has simply not looked back and has become one of the biggest names in the discipline.

In 2018, Borgmeier won the Long Drivers European Tour Order of Merit which is arguably his most impressive achievement to date.

At the moment, he is something of a social media phenomenon as he has teamed up with his new friend and former US Open champion Bryson DeChambeau.

Borgmeier has been instrumental in helping DeChambeau develop as a Long Drive competitor. Back in September, the 28-year-old finished seventh at the Professional Long Drivers Association Championship.

This was an impressive debut for the eight-time PGA Tour winner and he and Borgmeier, along with popular golfer and fitness buff Hogan Molthan, have started a new platform on Instagram named Regecy.

This platform looks to be dedicated to gym and fitness content as well as the Long Drive duo hitting shots as far as they can at various driving ranges.

It appears that Borgmeier, born in Paderborn, Germany, has been taking some tips on the golf course from DeChambeau, as the footage above suggests.

At Kapalua, Borgmeier is stood on the tee box of a 341-yard par-4 and due to his big-hitting instincts, he is taking dead aim at the green.

RELATED: TOP 5 PUBLIC GOLF COURSES IN ENGLAND YOU NEED TO PLAY IN 2022

As the German's longest drive in competition is a staggering 436 yards, this par-4 was light work. He hit a low, piercing drive that hooked straight towards the pin.

The ball bounced on the green and no doubt nestled near the hole. It is an incredibly satisfying shot to watch and it would be great to see more content of Borgmeier on the golf course as well as the driving range.