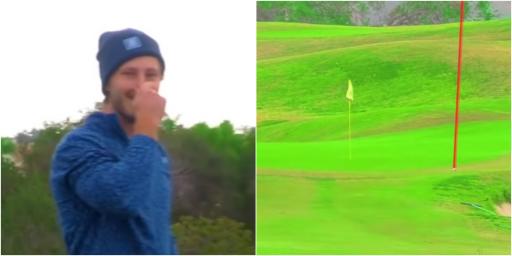 YouTube content creator Bubbie Golf, who is part of the team at GoodGood almost achieved the unthinkable: a hole-in-one on a par-4.

Real name Tom Broders, the YouTuber is known for some simply disgusting ball flights and trick shots he posts on his Instagram page.

He was also part of the team that memorably managed to film his colleague Matt Scharf finding that all impressive hole-in-one on a par-4.

The GoodGood team have risen up the ranks in the YouTube golf community.

It all spawned from trick shot specialist Garrett Clark, who started posting his shots from his back garden on Instagram.

Now they are a team with a channel of their own and their own YouTube channels.

So much so, the team now have their own studio and a team of editors helping to produce their content.

One of the team, Stephen Castaneda, is even building his own golf course.

Content, as they say, is king. And these guys know how to do it properly.