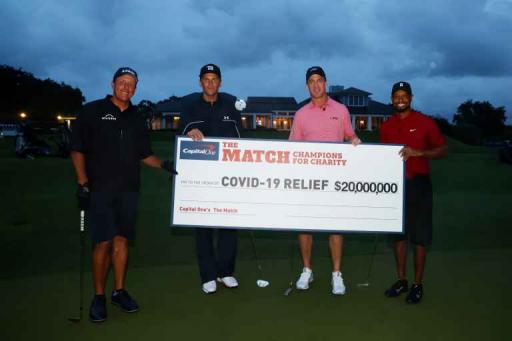 The Match: Champions for Charity, which saw Tiger Woods and Phil Mickelson once again go head-to-head for millions of dollars - although this time every cent went towards coronavirus relief - has shattered television records in the United States.

We recently watched the TaylorMade Driving Relief skins match that became Sky Sports' best-performing show since lockdown and now the latest charity match that saw Woods and Peyton Manning beat Mickelson and Tom Brady has made its own bragging rights across the pond.

Turner Sports produced a press release that was sent out on Monday, that stated the second edition of The Match which took palce at Medalist Golf Club in Hobe Sound, averaged a whopping 5.8 million viewers, although the action was shown live across four platforms in the USA, with TBS, TNT, TruTV and HLN all broadcasting Sunday's entertainment.

The press release said that it was the largest golf audience ever on cable, beating the previous record of 4.9 million viewers previously set when ESPN showed the first round of the 2010 Masters, where Woods returned after a difficult year in his personal life in 2009.

The PGA Tour is set to return to action and to our televisions on June 11 at the Charles Schwab Challenge.

NEXT PAGE: 69% say pace of play is "great" for rounds during lockdown