Matt Wallace got off to a great start at the Portugal Masters and was putting brilliantly using AimPoint. 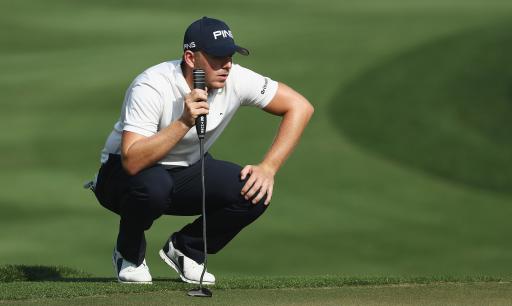 Matt Wallace went into the Portugal Masters as the favourite to win, due to being the highest ranked player in the field and because he seems to be hitting form once again and he's off to a very decent start, with the help of one of the most popular putting techniques.

On Thursday, the Englishman shot a four-under-par score of 67, currently four shots off of the leader Louis De Jager. Wallace put together a brilliant first round and his putting, which can often be the downfall of his game, looked the best it's been for a while.

What was interesting to see, was that Wallace was using AimPoint, something we haven't seen him use before. There are currently over 200 Tour professionals who use AimPoint, having used the system for over 65 victories on Tour.

Names as big as Dustin Johnson, Justin Rose, Adam Scott and Lydia Ko have all used or are still using the popular putting system and it seems to only be growing in popularity. Scott used it to get him to No.1 in the world back in 2014 and DJ also used it to reach the top of the world rankings, before Koepka knocked him off his perch.

Wallace was reading his long putts extremely well and sinking a few to make birdies to climb the leaderboard. The 29-year-old will be keen to start picking up his form and winning some tournaments, as Wallace will be desperate to make his Ryder Cup debut next year at Whistling Straits.

"The easiest way to describe it is it's a very simplified way to get the correct break on a putt," says Mark Sweeney, AimPoint Technologies Founder.

"You really just need to know one factor about every putt and you can get the correct geometrical break for the putt. So rather than just standing up there and guessing, you're actually intelligently finding your slope and then we can assign a value to how much the ball breaks based on the amount of slope you're putting accross," he added.

If you've never seen AimPoint in action before and want to know more about how it works, check out this video below from our friends at Meandmygolf: