Matthias Schwab leads by one in the Turkish Airlines Open

Matthias Schwab has a one-shot lead following round two of the Turkish Airlines Open. 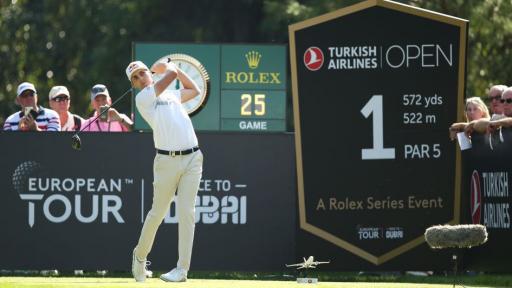 Matthias Schwab continued his fantastic form on the European Tour on Friday, shooting a five-under-par score of 67 to take a one-shot lead at the Turkish Airlines Open as he hunts for his maiden victory.

Justin Rose is chasing a third consecutive victory in Antalya and he will be well in the mix over the weekend, with the Englishman shooting a five-under round for himself, leaving him just two shots behind Schwab.

A four-way tie for second will be chasing Schwab over the weekend, with Danny Willett, Ross Fisher, Thomas Detry and Alex Noren all just one behind. Fisher, who hasn't won on the European Tour since 2014, shot a fantastic eight-under par round of 64 to put him in the mix.

"I wasn't really hitting them great at all, especially early on but kept it together," Schwab said. "The long game wasn't on but I managed to make a few good pars. On the back nine I found my swing a little bit and made a few good birdies coming home."

It was the Swede Noren who held the lead until a bogey at the par-5 last hole, allowing Schwab to capitalise as he made birdie, while Rose birdied three of his last five holes to push him closer to the top of the leaderboard.
Rose is bidding to make history and become just the fourth player to win the same tournament three consecutive years.

It's set up to be a dramatic weekend at The Montgomerie Maxx Royal, with just four shots separating the leading 24 players.
The shot of the day went to Victor Perez who came inches away to a hole in one where he seemed to forget to put his glove back on, but that didn't matter...