Meet Jim Kaat: The man who shot his age left-handed AND right-handed

Jim Kaat is a man of many talents as he prepares to be inducted into the National Baseball Hall of Fame. 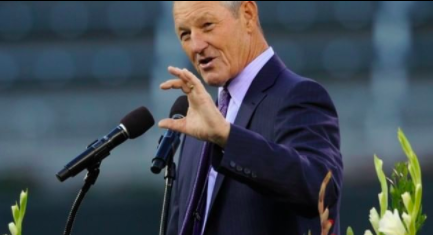 For many golfers in their old age, it is extremely difficult to maintain the standards that they once could reach when they were younger.

Their bodies can't produce speed and power anymore. But this is the beauty of golf as it is one of the only sports you can play and enjoy in later life.

Jim Kaat certainly enjoys his golf when he is not watching or talking about baseball and he has a unique skill that many golfers would die for.

Kaat, 83, played Major League Baseball for 25 years for six different teams. He won 283 matches and he was known for his incredible pitching.

He also worked as a television commentator for the sport for three decades too. Earlier this month, Kaat was elected into the National Baseball Hall of Fame.

To be inducted into such a prestigious and exclusive club is a grand achievement, but maybe not as incredible as his accolade on the golf course which, dare I say it, no one else has ever accomplished.

When he was 75, Kaat shot his age right-handed and left-handed while a member at McArthur Club in Florida. Not only does this show that he has maintained his quality of golf into his old age, but he can unbelievably play as well with the weaker side of his body.

Kaat is naturally left-handed but after he struggled with his short game, a PGA coach suggested that he played right-handed around the greens. This is where it stemmed from.

"I was the only one crazy enough to try it," he said. He has since admitted that age is beginning to finally catch up with him.

"Your body just doesn’t do what you want it to do at 83. I just do it now for the camaraderie with the guys and to hit a few good shots. I just enjoy the challenge of the game. I try to hit balls every day. It’s great therapy just to be outside."

It would be such a joy to master multiple sports but Kaat has gone above and beyond this. It is extraordinary to think that being inducted into a national hall of fame is arguably not even the greatest achievement in his career.