The PGA Tour tweeted a picture of how you would build your 'Ultimate Golfer' and included many faces from the circuit, but not Brooks Koepka. 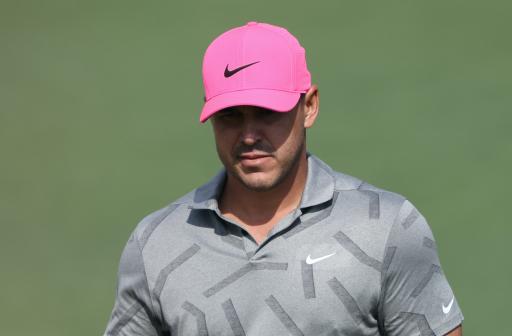 On his day, Brooks Koepka is a formidable competitor that won't take defeat for an answer. His four wins at major championships came in double-quick time and brutal fashion.

He is an eight-time winner on the PGA Tour with his last victory coming at the Waste Management Phoenix Open earlier in the 2021 season.

This was off the back of three missed cuts too which proves the killer instinct on the course is always within him. He came tied second at the PGA Championship, tied fourth at the US Open and tied sixth at The Open.

RELATED: THE BEST PETER MILLAR GOLF SHOES FOR YOU THIS CHRISTMAS!

Koepka had a solid season, to say the least, even though he recently told a reporter that he hasn't reached his peak yet. A scary thought indeed.

Yesterday, the PGA Tour tweeted a graphic of how you would want to build your 'Ultimate Golfer'. It was split into four categories: Driver, Irons, Wedges and Putting.

RELATED: TIGER WOODS: WHERE DOES HE GO FROM HERE? THE MASTERS OR ST ANDREWS?

Not a Koepka to be seen in either category and the 31-year-old noticed this himself and gave a short and sharp response to the tweet with one of his own, as you can see above.

He responded with an emoji with a monocle on, as if to suggest that he looked closely and he still couldn't find his name in any of the four categories.

If you were to put Koepka in one of these categories, who would you replace and why?

NEXT PAGE: WHEN ARE WE LIKELY TO SEE TIGER WOODS BACK ON THE PGA TOUR?

PGA tour
brooks koepka
bryson dechambeau
Twitter
Rory McIlroy
Previous
When are we likely to see Tiger Woods back on the PGA Tour?
Next
PNC Championship records MORE VIEWERS than The Open Championship