Wie takes to Twitter to reveal her outrage at Giuliani's words on a recent podcast... 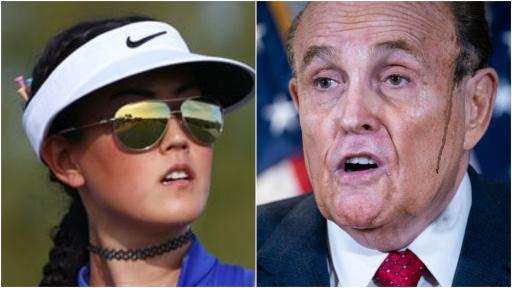 Michelle Wie has hit back at Rudy Giuliani - the former personal attorney of Donald Trump - after he shared a crude story about being able to see the LPGA Tour pro's "panties" during a charity golf fundraiser back in 2014.

Giuliani was speaking on Steve Bannon's War Room podcast and had been discussing the life of Rush Limbaugh, the influential rightwing talk radio host who had died on Thursday.

He then claimed he would like to tell a "joke" about Limbaugh when the pair came in contact with Wie on the golf course.

WATCH Giuliani's crude comments in the video below:

Definitely not the point, but keep wondering why Rudy called this a joke. What is the punchline? pic.twitter.com/VNKgoq92KS

"Do you have time for a funny story?" said Giuliani, who was told by Bannon that he had about a minute to tell his story.

"Every once in a while, I was always his partner. He [Limbaugh] always wanted me to drive because he wanted to be smoking some cigars.

"So on the green is Michelle Wie and she is getting ready to putt.

"Now Michelle Wie is gorgeous. She’s six feet, and she has a strange putting stance. She bends all the way over and her panties show. The press was going crazy. They were trying to take pictures of her panties.

Giuliani then ended the story by asking: "Is it OK to tell that joke?" Bannon replied: "Well we already told it so, I don't know."

"What this person should have remembered from that day was the fact that I shot 64 and beat every male golfer in the field leading our team to victory," wrote Wie on her Twitter post.

"I shudder thinking he was smiling to my face and complimenting my game while objectifying me and referencing my ‘panties’ behind my back all day.’"

"What should be discussed is the elite skill level that women play at, not what we wear or look like. My putting stance six years ago was designed to improve my putting stats (I ended up winning the US Open that year), NOT as an invitation to look up my skirt!"

Following Wie's response on Twitter, the USGA commented: "Sexism has no place in golf or in life. We are always in your corner."