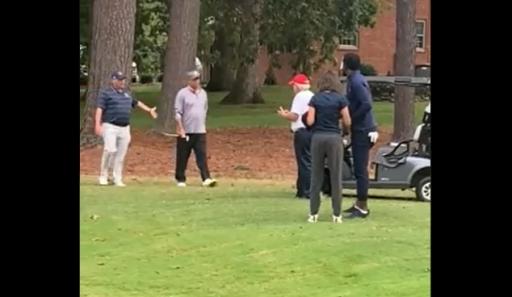 JR Smith, the two-time NBA champion, required medical attention after stepping in a beehive on his NCAA golf debut on Tuesday.

Smith won NBA titles with Cleveland Cavaliers in 2016 and again in 2020 with Los Angeles Lakers.

But this year Smith has swapped the courts for the fairways by joining North Carolina A&T's college golf team.

The 36-year-old got off to a slow start in his opening round of the Elon Phoenix Invitational on Monday with a 12-over 83, before adding a 7-over 78 in the afternoon.

Smith did manage to beat a pair of La Salle golfers but North Carolina found themselves in 11th place out of 13.

Things did not get much better for Smith on day two, however, as he required medical attention when stepping foot inside a beehive when looking for his wayward drive down the 12th hole.

A video and images have since emerged on social media, with Smith clearly in pain as he rubs his foot and ankle.

Smith reportedly required immediate access to the on-site medics, while letting a couple of groups behind play through.

.@TheRealJRSmith gets the medical cart called in after stepping on a bee hive while searching for his ball in the woods. Currently on the 12th hole and now letting other groups play through while he’s being evaluated. @GolfDigest @RiggsBarstool @SportsCenter @BleacherReport pic.twitter.com/IIqsAmfuOO

@TheRealJRSmith attacked by a whole nest of yellow jackets in first golf tournament. He has received treatment and resumed play. pic.twitter.com/U6lz5G6eAX

Smith went on to make a double-bogey on the 12th hole and found himself 2-over par thru four holes in his final round.

As it stands, Smith is well down the field in 81st place.

HOW AMAZING IS THIS MAN!!! DAMN IM BEYOND PROUD OF MY BROTHER! https://t.co/i4Vsi8Pskk

Los Angeles Lakers legend LeBron James gave a shout out to Smith on Twitter during his first round yesterday.

According to the school, "all A&T golfers must qualify for each tournament in practice unless the golfer finishes first or second on the team in the previous tournament."

Smith qualified for this tournament by one shot.

Pulling up to the range at my first college tournament! pic.twitter.com/RDNJGhiRaw

His head coach Richard Watkins said: "He has a good enough golf game to put up some good numbers, but this is what I tell people. If you want to find out how good a golfer really is, put the word tournament or money in front of the round.

"Playing when there is nothing on the line is one thing. But, put meaning to it, and the heart rate changes. The grip on the club changes, and we get to see who you really are.”