The Postman posted the update on his Instagram stories and included a bomb emoji as he called out the Ryder Cup sensation. 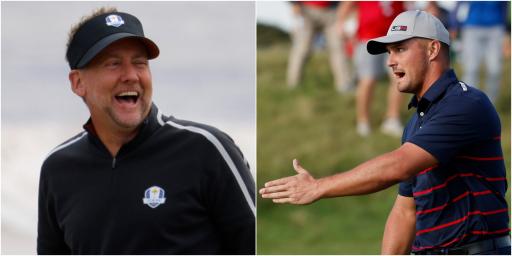 Ian Poulter has taken to social media to jokingly call out Bryson DeChambeau.

Poulter, 45, posted an image on his Instagram stories with his numbers after bombing some drives in his most recent practice session.

By his own admission Poulter is getting on a bit but that doesn't stop him putting in the work on the range in the pursuit of hitting bombs.

Poulter displayed some solid numbers with a carry distance of 314.2 yards, a clubhead speed of 116.2mph and a ballspeed of 174.4mph.

By contrast, he is still a fair way behind DeChambeau's numbers.

DeChambeau finished sixth in his debut at the Pro Long Driver's Association World Championships a few weeks ago in Las Vegas.

His biggest drive in the final eight was 406 yards, although that was into very strong gusting winds.

His fastest ballspeed in the tournament was 219mph.

DeChambeau silenced his critics as he was emphatic at the Ryder Cup.

He posted video updates on YouTube as he trained twice a day for his debut in the long drive event.

The 28-year-old even admitted his hands were wrecked with blisters as he put his central nervous system to the test.

Kyle Berkshire, 24, won his second world title with a 422-yard drive over former champion Justin James who hit a 418-yard ball in the final.

So Poults will need to put some more work in at the gym if he is to truly challenge DeChambeau in a long drive contest.

NEXT PAGE: WHAT COURSES COULD GARETH BALE PLAY IN NEWCASTLE?