Nelly Korda has had a fantastic season on the LPGA Tour and this has now been highlighted by winning her first major victory at The Highlands Course. 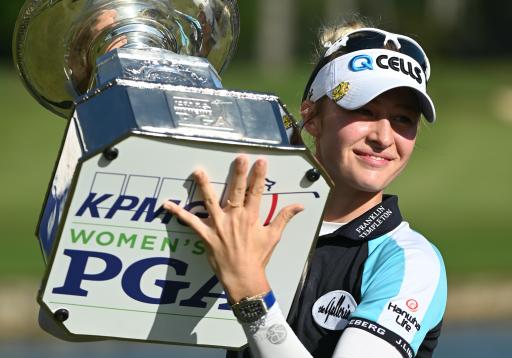 Nelly Korda has won her first major title at the Women's PGA Championship in Atlanta, finishing three shots ahead of Lizette Salas.

By securing her victory at The Highlands Course, Korda has become the new World No. 1 player and followed up last week's success at the Meijer LPGA Classic at Blythefield Country Club.

The 22-year-old began her final round level with her fellow American Salas, but Korda was incredibly impressive on Sunday, making two eagles on her way to a round of 68 to finish on 19-under-par.

One of these came on the par-5 12th hole, which was a crucial stage of the round because Salas made a bogey to fall four shots back.

Although the new World No. 1 made a double-bogey at the par-3 15th hole, Salas couldn't make up any ground and finished three shots behind on 16-under-par.

Korda's older sister Jessica finished in a tie for 15th place at 4-under-par, in what was clearly a special week for their family. As well as winning in back to back weeks, Korda also won the Gainbridge LPGA back in February so it has been an electric season for her.

"I've put in a lot of hard work and to finally get a major championship... I don't even have the words," Korda said.

"I had a great week last week and carried the momentum into this week. This is something I have worked for since I was 14, since I played in my first tournament I wanted to be a major champion and to get it done here, it's really special.

"Lizette played really well as well, I just tried to keep a level head and take it one shot at a time."