Thomas Pieters is one of the most fiery players on the European Tour but he showed at the BMW International Open that he has his lighter side. 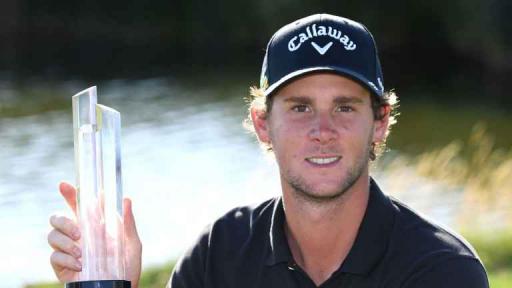 Thomas Pieters finished in a tie for 29th place at the BMW International Open in Germany at the weekend, but he had a moment to remember when his ball was submerged underwater.

We also saw Viktor Hovland forced to hit a shot like this at Golfclub München Eichenried when his ball finished on the cusp of water and the turf.

However, the Norwegian, who went on to win the tournament on 19-under-par, only took one sock and one shoe off to perform his shot whereas Pieters took a different approach.

The big-hitting Belgian proceeded to take off his shoes, socks and trousers to avoid as many of his clothes getting wet as possible. Standing in his underpants, Pieters splashed his ball out of the water.

Unfortunately, the effort applied by the 29-year-old was barely worth it as his ball landed short of the green and bounced backwards. However, it made for great entertainment for golf fans and viewers of the European Tour.

Pieters, who starred for Europe at the 2016 Ryder Cup in America, has not won on the European Tour since the D+D Real Czech Masters in 2019.

Golf fans reacted to the footage of Pieters:

"Why did he need to take his shorts off?" one fan said.

"Bottoms off for an inch of water?" one fan commented.

"He should get a stroke penalty for wearing those saggy boxer shorts," another fan said.

"I think players have been hitting it in the water just to do this," another fan commented.

"Are you allowed to touch the water on your backswing? Not a penalty shot?" one fan said.

NEXT PAGE: HARRIS ENGLISH: WHAT'S IN THE BAG OF THE 2021 TRAVELERS CHAMPIONSHIP WINNER?