Paige Spiranac used Rory McIlroy as an example as she defended women who have attracted Internet hate for "overly-sexualising" themselves. 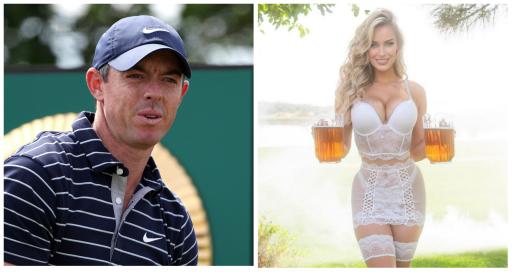 Golf glamour girl Paige Spiranac took aim at the likes of Cristiano Ronaldo and Rory McIlroy as she once again defended women who have been criticised for "over-sexualising" themselves.

Like Paige, Dunne, 20, rakes in a huge amount of cash through her social media channels and her name, image and likeness deals.

It has been reported that Dunne earns as much as $2m per year. We would suggest that Paige - who has more followers on Instagram than Tiger Woods - also makes an amount of money that will make your head spin.

Dunne was last week called out by a women's basketball coach at Stanford University -  Tara VanDerveer - for "upholding sexism".

This did not sit well with Paige and she wrote:

I’m so sick of women belittling accomplishments of other women because it’s done differently than they would. @livvydunne is getting hate for making 2 million a year. She’s built a successful business (at 20) all while being a student-athlete. That’s badass.

Now Paige has expanded on the topic once again. In her latest video posted on Twitter, she said:

Related Articles
Paige Spiranac whips off top and does Cristiano Ronaldo SIUUU celebration
Paige Spiranac Best Golf Outfits: Country Club, Public Course, IG Golf Girl
"People are saying 'stop over-sexualising yourself', 'you are taking women back', 'nobody will take you seriously'. I think that is a stinking big pile of s****."

Paige then spoke about the top four highest-paid female athletes of all time according to Forbes.

According to the publication those are tennis stars Naomi Osaka, Serena Williams, Venus Williams and gymnast Simone Biles.

"These women have a lot in common. First of all they are all athletic bada****, two of them are considered the greatest of all time. They have business ventures outside of sport and they have all posed for Sports Illustrated swimsuit. They can actually do it all!
"I know people are thinking a man would never show off his body or over-sexualise himself for attention of for a monetary gain. Are you sure about that?"

Then Paige posted a montage with photographs of scantily-clad male sports stars.

I said what I said pic.twitter.com/yoaVhNZooq

This is not the first time Paige has called out McIlroy.

In May this year Paige criticised the Northern Irishman after he didn't give any media interviews after failing to convert after making a fast start at the U.S. PGA Championship.

Paige said that he "served up the Rory McIlroy special" as he once again failed to deliver in a major.

Next page: Paige Spiranac jokes about her new calender