Paige Spiranac has defended Brooks Koepka after he got a little bit emotional when he won LIV Golf's Invitational in Jeddah. 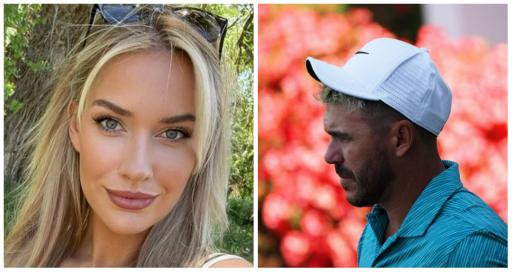 Paige Spiranac has made it clear she's not a huge fan of the LIV Golf Tour, but she has leapt to the defence of Brooks Koepka.

Koepka, 32, claimed his first LIV Golf win in Jeddah in the penultimate event of their inaugural $255m season.

He later admitted he briefly thought his career may have been over after revealing the true extent of his injury troubles over the last two years.

The American, who spent the earlier part of that week complaining about the situation regarding LIV players getting world ranking points, appeared more than a little bit overcome with emotion in the immediate aftermath of victory.

In truth, it really was the first time we have seen such a display from Koepka. It has been pointed out that even when he won each of his four major championships he didn't let his guard down.

I mean, Dustin Johnson even cried when he slipped into the Green Jacket after winning The Masters in 2020.

There was a bit of a discussion on social media as to whether or not Koepka's tears were genuine or not.

This topic was discussed on Paige's podcast called Playing a Round with Paige Renee, which you can listen to here.

On this edition Paige and guests Samantha Marks and Dan Regester discussed Koepka.

Koepka was described as a LeBron James type figure who "just wants to be liked".

Paige said: "I actually agree with that. And I think that's why him and Bryson are actually more similar than they are dissimilar because of that reason. I think a lot of these guys just truly want to be liked.

"When they were on the PGA Tour they were in this little bubble where they were always presented in a favourable light and they very rarely had press around them. I think sometimes with Brooks he has this guard up because he does want to be liked, he wants to be this cool guy.

"And I think that a lot of guys when they went over to the LIV Tour getting hate for kind of the first time. I think Brooks got it more than other players. But you had Harold Varner talking about it, you've had multiple players talking about how hard it's been to actually get this amount of hate because [it's] something they haven't experienced before.

"And so, I think it was a mix of just being really draining [and] dealing with things that they haven't had to deal with before [like] being outside of that protective PGA Tour bubble.

Related: Nine players who went back on their word about LIV Golf

Paige continued "He's overcome some injuries, he's had some different life changes [like] getting married. I think it was just impactful for him to win again to have it feel like it was actually a real win.

"It felt genuine to me. Which was surprising, because I was watching and I was like, 'Oh, he actually is getting choked up.'

"And he has never gotten choked up with any of his PGA Tour wins. Even with his majors he wasn't really choked up either. It was really fascinating to see him almost have the guard down for a second which we never really see with Brooks."