Casey and his wife posted the image onto their respective Instagram pages. 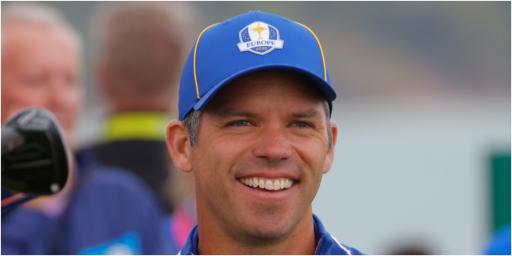 The Ryder Cup may well and truly be over but there is still news filtering out from the aftermath.

Justin Thomas is auctioning off his shoes, a signed headcover and a pin flag signed by the winning United States team.

While it was also revealed that the motivational text message Tiger Woods sent to his team mates was: "Step on their necks".

It has also emerged that Team Europe's Paul Casey got a special gift from his wife Pollyanna Woodward.

She gifted Casey a blazer with a picture of her wearing lingerie that is sewn into lining of the blazer.

It was given to Casey years ago but the photograph has re-emerged and fans have been quick to pass their judgement.

Casey went without a point as the United States beat Europe 19-9.

Unfortunately for Casey he came up against Dustin Johnson at every point.

He played against him in every team match and then lost to him in the Sunday Singles as DJ went 5-0.

It was by far the biggest victory in the modern era and the third successive home victory for Steve Stricker's side.

The photograph of the custom-made jacket Casey was given has been circulating again on social media.

And fans have giving their thoughts on it.

One wrote: "That's awesome, you are literally watching his back."

Another added: "Yep and my mrs is always on my back too".

RELATED: WHO IS POLLYANNA WOODWARD?