"The most entertaining golfer on planet earth" 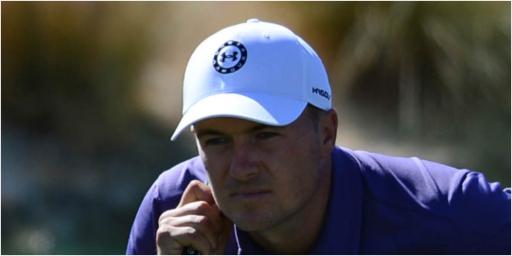 Golf without Tiger Woods and Jordan Spieth is a dull, dull place.

Which is why it's great to see Spieth return to some form over the past year and now he's back to his dazzling best.

Great at the Ryder Cup, back in the winners' circle on the PGA Tour and married with a baby on the way.

Everything is looking up for Spieth, who has produced so many spectacular shots over the years we've legitimately lost count.

Spieth conjured up another "go get that" moment at the CJ Cup in Las Vegas this week.

Justin Thomas is working on "UNCOMFORTABLE" shots ahead of Hero World Challenge
Tiger Woods' yacht is MOORED in Albany, fuelling speculation over appearance

A wild tee shot at the par-3 11th left Spieth with barely any green to work with and a water hazard looming the back ground.

Holding the green was one thing, but holing out was another.

Short game wizard Spieth stepped up and landed his ball perfectly and the ball rammed into the cup.

Playing partner Louis Oosthuizen laughed and Spieth checked the grooves on his wedges.

"Thankyou" he said as he grabbed the ball out of the cup.

The incredible thing is this was not as good as the famous recovery shot he played at the Ryder Cup last month.

On a vertical bank, Spieth hacked one up into the stratosphere and landed the ball less than 10 feet to the pin.

This is how golf fans reacted to his latest piece of mastery:

RELATED: JON RAHM PROVES WHY HE IS ONE GOLF'S GOOD GUYS

NEXT PAGE: JASON DAY ADMITS "I CAN'T KEEP PLAYING LIKE THIS"