Paulina Gretzky has posted photos on her Instagram ahead of the big day. 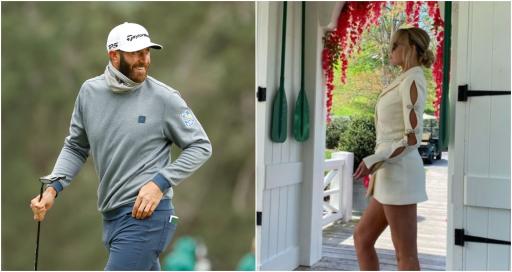 Golf’s royal wedding is finally here as Paulina Gretzky and Dustin Johnson are getting ready to tie the knot.

Related: Dustin Johnson goes fishing ahead of tying the knot

The couple got engaged in 2013. They were set up by Gretzky’s mother Janet and it has been reported that her father and ice hockey icon Wayne Gretzky was present on their first date.

Paulina, 33, and DJ have two children together. Their first son, Tatum, was born in January 2015. Tatum had a brother in June 2017 when their second son River was born.

In March, DJ and Paulina had a joint bachelorette weekend in St. Barth’s. Images were posted all over the Internet of the extravagant time they had after flying in on a private jet.

Earlier in the week Johnson, 37, went fishing with his future brother-in-law Trevor Gretzky. Golf fans remarked that he looked happier catching those fish than when he won his green jacket at Augusta.

Thursday arrived and more pictures emerged showing Johnson waiting for his bride-to-be in Tennessee. They are getting married at Blackberry Farm, a luxury resort in the city.

Paulina has also posted images onto her Instagram stories showing personalised golf carts, polaroid images of the couple and lavish dinners complete with all the champagne you could wish for.

We’ll expect to see more incredible images over the weekend.

Next page: Paulina dresses for the occasion to cheer on DJ at the Masters