Dustin Johnson may have had the weekend off from the PGA Tour, but afterwards, he enjoyed a spot of fishing as he prepares for his wedding to Paulina Gretzky. 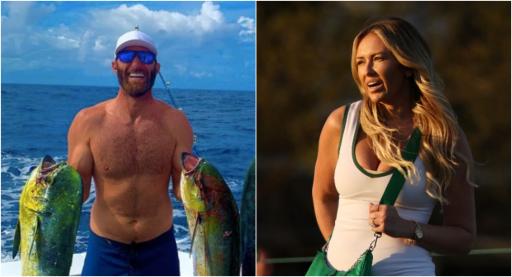 Dustin Johnson may be one of the most successful golfers of the modern era, but he also has other passions away from the PGA Tour.

More: Paulina Gretzky dresses for the occasion at the Masters to support DJ

Unfortunately for Johnson, he shot rounds of 72 and 71 at the RBC Heritage to miss the cut at Harbour Town. But it looks as though the disappointment didn't affect him for too long.

The two-time major champion has since enjoyed a nice spot of fishing and by the looks of his Instagram post, it was a very successful session out on the water.

It seems that the former World No.1 has experienced more joy in his boat than he has on the golf course in recent months. He hasn't won on the PGA Tour since The Masters in 2020.

"2 are mine," was a comment on the Instagram post by ice hockey legend Wayne Gretzky, who is soon to be Johnson's father-in-law when he marries Paulina Gretzky.

Johnson has been engaged to Paulina since 2013 and she has previously said that his busy PGA Tour schedule has held them back from tying the knot.

In February, Paulina and her friends enjoyed a bachelorette party at what looked to be a very exotic and luxurious location. We still haven't been told a date for the wedding.

What we do know is that it will be held at Blackberry Farm, a five-star resort in Walland, Tennessee. Paulina has been a huge supporter of Johnson throughout his career and she was seen watching him play at The Masters earlier this month.

Johnson finished tied 12th at Augusta National which is one of four of his top-25 finishes on the PGA Tour this season.